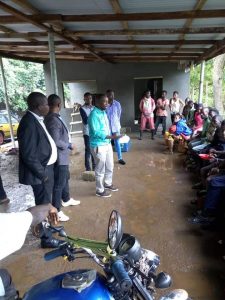 Investigations have revealed that the Hon. Minister of Youth Affairs, Mohamed Orman Bangura and other stakeholders raided the FBC community after engaging the youths at the car wash who denied being part of an act of attacking female student (s) from the university after their examinations.

They promised the Minister that they will do everything possible to bring the culprits to book as they have been falsely accused.

On Wednesday 24th July, 2019, immediately after work, the Minister mobilized his team, including a lecturer at the university Mr. Teddy Foday Musa to join hands with the youths of the car wash to raid the perpetrators of last week’s incident.

During the search, one of them was caught and has been taken to the FBC Police Post for further interrogation.

The Hon. Minister further addressed the community people to bring out those who did the act to the said students within the next few hours; otherwise, government will take action against them for illegally occupying the land of the university.

“The University is your landlord and you can’t hurt your landlord, so for all to be in peace in this community, bring out the culprits or else we will call the police to raid the entire community. Two hours later the ring leader known as Chucks was produced by the community people to the police.

It is clear that over the years, students at Fourah Bay College (FBC) have been plagued with unfortunate attacks from robbers within the mountain communities surrounding FBC.

The recent of these attacks on students happened a few days ago which led to the stabbing of a year 3 female student and all fingers are pointing at the youth at the Berry Street Car Wash Centre under construction by the Ministry of Youth Affairs. Owing to growing concerns and the quest to see that students at FBC live in an academic environment that is conducive, more so at a time that 2nd semester examinations are ongoing.

It can be recalled that as a result of the increase in unemployment on the part of the youth of Sierra Leone, the Ministry of Youth Affairs has taken steps to empower young people who are engaged in car washing as a means of making them self-reliant.

According to the Chairman of the Berry Street Car Wash Mr Savage, he said that: “the Youth Minister is one that is on record to be the only minister for years who has made more than 8 visits at our car wash within a year and has always told us to believe in his leadership and the government of President Bio. So for anyone to do an unfortunate incident and the whole world is accusing us even though we are innocent, we won’t sit and fold arms, but will join hands with the security forces to arrest and prosecute perpetrators”.

He further assured the Minister and the University of their full cooperation and promised to join the police to provide security in the college for the safety of the students.