The Sierra Leone Association of Journalists (SLAJ) Disciplinary Committee has ended its regional hearings across the country with the last meeting held with media monitors in the Western Area Districts (Urban and Rural) on the 28th of June 2022 at SLAJ Headquarters on Campbell Street in Freetown.

The meeting was chaired by Claudia Anthony, the Chairperson of the SLAJ DC and six monitors were present during the meeting.

Each monitor was accorded the opportunity to give updates about their work, clearly distinguishing the observation made for print media journalists from that of electronic media.

The media monitors from the Western Urban Area in Freetown confirmed that breaches of the media code of practice are more predominant among print journalists, which indicates that the print media should step up in their observance of the code.

The engagement brought to the fore several challenges the journalists claim they are facing, including lack of remuneration, dependency on adverts and journalists adopting unprofessional means to pay themselves. The monitors recommend continuous training of journalists, especially in the provincial areas.

The monitors also reported that journalists do a lot of stories and discussion programs on corruption which is commendable. They further said some journalists complain about the non-payment of meager salaries and NASSIT contributions by their employers.

Some monitors commended journalists working in community radio stations for doing programs to hold the Government accountable. However, he revealed that there is some amount of tension that continues to boil between the radio stations and the public because of how they perceive the radio stations to stand politically.

Meanwhile, the monitors in the Western Region recommended periodic training to upgrade their own skills and strengthen their capacity to do their jobs as monitors. They also suggested that SLAJ could use its MoU with the security sector to solicit training of journalists in the area of reporting petty crimes. This is in response to issues of impersonation by journalists in the Eastern and Southern regions.

In the Northern Region of the country, the DC met with monitors at the SLBC Hall in Makeni on 16th June 2022, during the SLAJ Triennial General Meeting. The engagement was chaired by Claudia Anthony and ten monitors attended.

Reports received focused on, among other things, what is referred to as perceived [political] polarization on the part of both the media practitioners and the public. The monitors also reported that there is a lack of trust in the relationship between the listening public and journalists and their media houses.

Other challenges identified include a lack of logistics to effectively monitor media programs and activities in the region and the need for a form of identification for SLAJ monitors in order to effectively perform their tasks.

The monitors further reported that some clients have made it clear that they will not approach certain media outlets because of their perceived political leanings. They went on to suggest that there already exists some level of tension between the media and sections of the public ahead of the 2023 public elections.

In the South and Eastern Regions of the country the meetings were held on June 2nd and 3rd 2022, respectively, and attended by a cross-section of the National SLAJ Executive, members of the SLAJ Disciplinary Committee, and media monitors from various districts across both regions.

Speaking about their work the monitors stated that the attitude of journalists toward their profession is poor; indicating that there is always one issue or the other between and among colleagues to the point that there is growing division among them.

Another challenge they highlighted is the lack of equipment, especially digital recorders, which they said makes it difficult for journalists to get factual information for radio. The monitors accused journalists of putting themselves in the story rather than just reporting and that calls for continuous training and overall capacity building.

Media monitors in Kenema noted that the district has one of the most complex environments when it comes to media practice.

“There are about 11 radio stations and we have lots of issues. We are aware that some radio stations are perceived to be in support of certain politicians and political parties and this affects the job of journalists,” said James Jamil Fatorma, a monitor in Kenema town.

He went on to report that there are a lot of instances where journalists have been engaged in unprofessional conduct, especially radio presenters.

The monitors appealed to SLAJ to help in the conduct of more training for reporters and monitors, particularly as the 2023 elections approach.

Victoria Bernard, the Regional Chairperson of SLAJ East, said if the DC wants to succeed they must make sure that all radio stations get program schedules and outline the motive of each program.

“The DC should engage IMC to emphasize on welfare issues of journalists that includes payment of salaries. If IMC does not act tough in this regard we will not succeed in this our work, because most of the people doing programs are volunteers and if someone gets up at 5:00 am to do a program the person is likely to promote the one who gives him or her fuel or transport money,” she emphasized.

She called on SLAJ to engage IMC and NASSIT, claiming that as things stand the issue of compromise is on the increase.

The DC team encouraged all monitors to engage the public through the radio stations about their role as monitors.

In the Southern Region, the monitors complained that the lack of adequate resources makes it difficult for them to do their work. They informed the committee that radio stations are usually off for days, whilst indicating that in the district there are not many trained journalists who follow the code of ethics.

The chairperson of the DC responded by saying media institutions airing programs late is an in-house problem and not part of the committee’s mandate.

In Bo, a monitor reported that the district still has journalists that impersonate other professions, including police officers, inspectors of schools, health inspectors, etc. and that is a serious issue he said the DC should look into properly.

The DC called on the monitors to reveal the names of the said journalists in camera with the President and Secretary-General, assuring that the disclosure will be kept confidential. Like in the other districts the issue of Identity Cards came up as members suggested it would back up their legitimacy as SLAJ media monitors. 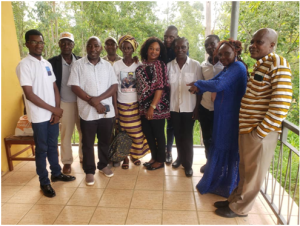 By Abubakarr Harding Mabel George brought a Child Maintenance matter to the Legal Aid Board a few months ago. She had dragged her partner/daughter’s father...
Read more

By Foday Moriba Conteh The Legal Link has stated in a Press Statement of 10th August, 2022 signed by its Executive Director, Rashid Dumbuya Esq...
Read more