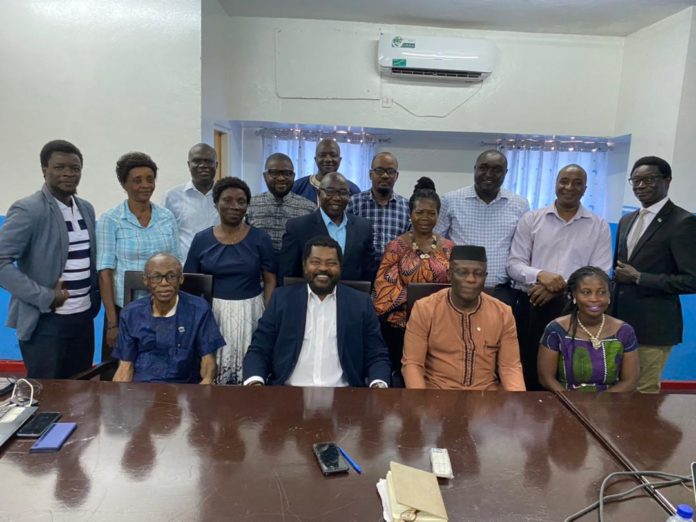 Ahmed Sahid Nasralla, President of the Sierra Leone Association of Journalists (SLAJ), has fondly referred to the newly constituted Independent Media Commission (IMC) Board as the IMC of SLAJ.

During a courtesy call on the 7th April 2022  to the IMC the SLAJ President revealed that it is the first time in the 22 years of history of the IMC that His Excellency the President of the Republic approved all the professionals nominated by SLAJ to serve in the IMC Board, including the Chairman of the Commission.

“Out of the 12 member IMC Board, SLAJ nominated seven, including the Chairman, and they were all approved. So technically this is our IMC, and we look forward to strengthen our relationship and partnership with the Commission so together we can work to address the myriad of challenges facing the media in Sierra Leone,” Nasralla pointed out.

He said the rationale behind the courtesy call is to show full solidarity to the new Chairman and Commissioners of the IMC and a demonstration of the confidence his leadership has in the Commission. He took the opportunity to congratulate the new Board and wished them well. He said he has been following activities of the Commission since they took up office and commended the Chairman for the initiatives he has begun putting in place to rebrand the IMC and make it more independent and efficient.

Nasralla noted that the relationship between the IMC and SLAJ had been one of distrust as practitioners held a very strong view that the Commission was policing the media rather than helping the industry to grow. He said media owners, editors and station managers often complain to the Association of intimidation by the Commission whenever they face its Complaint Committee to defend their controversial publications. He said while he would not condone reckless journalistic practice, he would like practitioners to come to the Commission with confidence and to see it as a partner and a creation of SLAJ to accompany the Sierra Leone media towards self-regulation.

Furthermore, the SLAJ President mentioned some of the strides his Executive has taken to promote professionalism in the media and to address the welfare, gender, and security challenges of journalists. He talked about the reconstituted Disciplinary Committee and its district and regional monitors, the launch of the Journalism Welfare Fund to promote independent journalism and assist journalists in emergency situations, the SLAJ Gender Advisory Panel to help the Association address gender inequality within SLAJ, its affiliate and sub-bodies, and across individual media houses, and the forthcoming media viability and investment conference in partnership with the Government of Sierra Leone and the BBC Media to build a case for investment in the media in Sierra Leone.

“I want to see a situation where the IMC will look at our initiatives and advise us how we can make them better. When you solve the problem of practitioners and their media houses the IMC’s work become less, and more energy and much-needed resources will be diverted to other aspects that will consolidate the gains,” said Nasralla.

Meanwhile, Nasralla called on the Commission to review the Media Code of Practice on Elections Coverage and Reporting and to enforce the payment of Journalists by media owners as provided for in the IMC Act 2020.  He advised the Commission not to just accept renewal fees from media institutions but should rather go beyond and verify the authenticity of documents presented to the Commission for annual renewal so that the welfare of reporters and other media workers are protected.

The SLAJ President also urged the Commission to strengthen its monitoring capacity of media houses operating in the country as he has been receiving a lot of concerns form the public regarding publications and broadcasts of certain media houses in the East of the capital Freetown, as well as in the rural areas.

In response, the Chairman of the IMC, Dr. Victor Massaquoi, thanked the President of SLAJ and his Executive and welcomed them to the Commission, and assured him of continuous collaboration between IMC and SLAJ.

He urged members of SLAJ to respect the IMC by complying with the IMC Act 2020, regulations and guidelines of the Commission; and compliance with registration and renewal processes and payment of fines imposed by the Commission on defaulters.

The IMC Chairman highlighted five Strategic Pillars that the Commission wants to address with immediate effect under his leadership: (i) to facilitate the enactment of the validated Media Code of Practice on Print and Electronic Media; (ii) to review the guidelines on the coverage of political party activities and elections reporting; (iii) to work closely with SLAJ to train journalists and capacitate IMC staff with requisite technical and professional skills; (iv) to engage in Media Research and Media monitoring and (v) to raise funds for the Commission to ensure sustainability.

“I think the relationship should be one of mutual respect and understanding of our roles and responsibilities. The IMC is a statutory body, SLAJ is not. The IMC has statutory powers to enforce compliance by media houses with the laws regulating the media. I believe freedom comes with responsibility, and under my leadership the IMC will strive to maintain that crucial balance. We will use the carrot and stick approach, but we will ensure we exhaust all the carrots before we use the stick. It is our collective responsibility to sanitize our media landscape,” said Dr. Massaquoi.