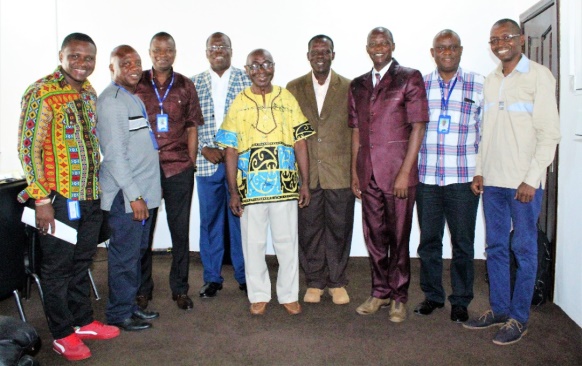 On Friday 6th March 2020, the Great Redemption Crusade, a faith based organisation headed by renowned Pastor, Francis Mambu met with the Management of Stats SL in a bid to establish a partnership that will culminate into the undertaking of a survey/research on churches, denominational spread and also to know fully, partially or non-evangelized districts, chiefdoms, sections and communities across Sierra Leone.

The Great Redemption Crusade which comprises of more than 150 churches across Sierra Leone  including the Faith Healing Bible Church and Faith Evangelist Church to name but a few,  met with the Stats SL Management to map the way forward on how such faith based research work, can be undertaken.

Speaking on behalf of the delegation from the Great Redemption Crusade, Pastor George Bunanie, expressed sincere felicitation from Pastor Mambu whom he says had sent them as the “John The Baptist” to prepare the way and that he would certainly be coming in the latter stages of the agreement.

Pastor Bunanie furthered that the Great Redemption Crusade had won an abundance of souls over the years at household, community, and national levels which they intend to consolidate. As such, they intend to consolidate the gains over the years that the crusade has achieved, hence the reason for this proposed survey which they hope will be able to measure the impact of the church in Sierra Leone vis-a-vis how well have the church covered Sierra Leone, where does the need still exist for Evangelism or Church Planning and how they could be informed to do more and better with the crusade.

He said all of this cannot be achieved without the right statistics that is authentic for which he says, they have come to Stats SL so that the right expertise can be sought. “The bible says Jesus fed 5,000 people, the statistics is there. It did not just say it fed people but it gave an exact number which in itself is statistics,” he averred. He continued that they want to work with Stats SL because whatever document they develop must speak to the reality of what obtains nationally and such document must be as a reference point for people who come to partner with them, whom they solicit assistance from or when they go to engage Government and that document must have the seal of Stats SL to authenticate it.

He concluded by saying that the specific objectives of the survey will be to establish benchmarks on key indicators related to knowledge, attitude and practice of Christians, provide situational analysis of the church population based on various denominations units of the faith and also establish a baseline on existing health and educational facilities in communities in the country.

In his response, the Deputy Statistician General, Andrew Bob Johnny, thanked them for the visit which he alluded to being like “seeing the light”. He informed them that Stats SL is the official and authorized Government body that is responsible for official statistics and data collection in Sierra Leone and as such Stats SL has the requisite expertise to carry out the required job.

He noted that the first step in the partnership will be the signing of a memorandum of understanding that will guide  the partnership stating clearly who does what, when and how so that clear obligations can be defined by the MOU.

Other members of the delegation from the Great Redemption Crusade delegation included Pastor John Momo, Pastor Samuel Pratt and Pastor Alex Mbayo whilst the receiving team from Stats SL included the Chairman of the Stats SL Council, Moses Williams, the Director of Censuses and GIS, Abdulai Brima, the Technical Assistant to the SG/DSG, Mohamed Korjie and the Director of Communication, Samuel Ansumana.