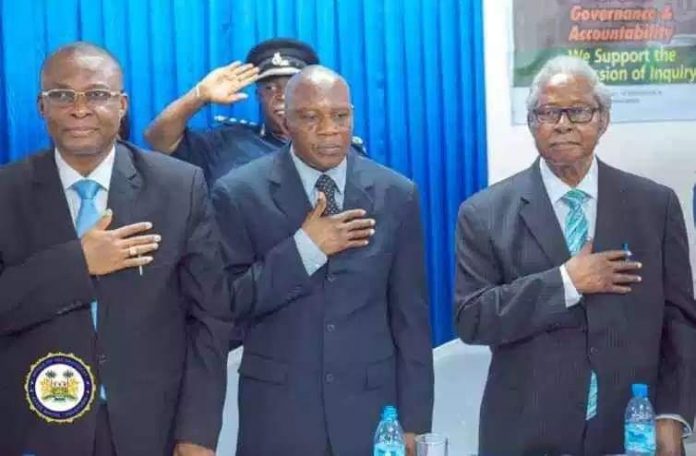 It could be recalled that whilst poor innocent Sierra Leoneans were dying in the hundreds every day during the Ebola outbreak, Government officials entrusted with funds for managing the emergency health crisis were playing fast and loose with the funds that were vital for containing the spread of the deadly virus.
What was amazing but deplorable to a majority of Sierra Leoneans was when the Parliamentary Accounts Committee took a lackadaisical attitude towards the adverse report on the gross mismanagement and misuse of the funds that was presented to it.
Now with the matter of misuse of funds during the reign of the former Government a subject of investigations by three judge led Commissions, the former Procurement Officer in the Ministry of Health and Sanitation, Ibrahim Brima Swaray, the former Permanent Secretary, Sadiq Kapuwa, the Ministers at the time, Miatta Kargbo and Dr.Abu Bakarr Fofanah as well as some other Ministry officials have become the subjects of intense grueling by the Commission.
Alongside the above named to answer to, among other investigations, how ambulances were bought and Le14 billion unaccounted for are Dr. Abu Bakarr Fofanah, Madina Rahman, Dr. Bash Taqi, Alfred Palo Conteh and Kawusu Kebbie from the Ministry of Finance. Also expected to be questioned is the Ministry’s former Permanent Secretary, Sadiq Kapuwa.
Grilling of the former Procurement Officer for the Ministry of Health started on Monday and continued yesterday Tuesday relating mainly to the fraudulent overpriced purchase of ambulances to help fight the Ebola outbreak.
Evidence presented by the Office of the Attorney General is from a real time audit that was conducted between November 2014 and April 2015.
What emerged clearly from the questioning by the judge was that all the named health Ministry officials responsible for handling of funds were if not criminally culpable, grossly negligent in their monitoring roles; with the former Procurement Officer denying that he knew little or nothing about how the Ministry did procurement and issued contracts for fighting the Ebola outbreak.
In another related development at the Commissions, as the inquiry unfolded, evidence was also presented to the Commission about the fraudulent manner in which fertilizers were purchased by the Ministry of Agriculture and poorly distributed, to the disadvantage of farmers and achievement of the Government’s much vaunted quest for food security.
The State alleges that about $16 million allocated for fertilizer was mismanaged.
Meanwhile, the ACC Archivist has tendered the asset declaration forms of 338 officials that served in the former Government from 2009 to 2018 as Ministers, Deputies and Heads of MDAs.
What is gradually emerging from the evidences being presented before the Commissions is that the former APC Government is being haunted by its Parliament and Executive’s failure to follow up stringently on the adverse findings made every year by the Auditor General during their eleven years in power and failing to take the appropriate institutional and legal remedial and punitive actions that were needed to curb wastage and mismanagement of public funds and to importantly deter the greedy, selfish and unpatriotic public officials that were entrusted with those funds from continuing to mismanage and waste them willfully with impunity.
The inquiries continue and The Calabash will keep the public informed with the juiciest information from the three Commissions.