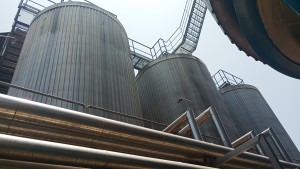 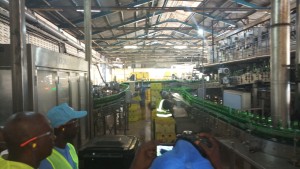 During a conducted press tour of the Wellington Industrial Estate offices of the Sierra Leone Brewery Limited (SLBL) Friday, 29 April 2019, members of the Press were shown the company’s latest investment of Over Le278 billion, being part of a Le3.5 billion investment on overhauling the bottling and packaging line.
Present at the ceremony were the Corporate Relations Manager, Albert Ojo Collier, the Product Manager, Dennis Macfoy and members of the Press. The meeting was chaired by the Assistant Corporate Relations, Unisa Conteh.
In his introductory remarks, Unisa Conteh briefed the media that the tour is to update them about the company’s investment of Le278 billion on the production and delivery of efficient service to its valued customers across the country. He further stated that the SLBL embarked on overhauling all its facilities to ensure quality service to consumers, adding it has been the reason for the shortage in bottled products.
Addressing the Press, Corporate Relations Manager, Albert Ojo Collier, invited them on a conducted tour of the company’s recently overhauled facilities. An investment of Le3.5 billion has been put into this upgrading and overhauling of its bottling and packaging line. This overhauling, he said, is to improve the efficiency of their bottling operations. Albert Ojo Collier disclosed that in consonance with international standards and best practices and in respect to manufacturer’s recommendations, the general overhauling of the facility was undertaken. The services of Krones, a German firm with specialization in the supply and modernization of such plants, plus local engineers and technicians undertook the work from January to February 2019. This investment, Collier stressed, is part of the company’s Le278 billion expansion and modernization program. This investment, he added, enhances their production capacity and ability to meet with any increasing demand of consumers for the years to come. He reiterated the company’s large scale investment since 2015, which saw the expansion, maintenance of high quality environmentally safe equipments and procedures, resulting in the installation of new massive Fermentation Storage Tanks (FSTs), Waste Water Treatment Plant, Mash Filter Equipment, CO2 and Cooling Plants and the most recent being the Canning Line (the first in Sierra Leone).
Dilating on the concerns raised lately about the shortage of bottle drinks in the market, Collier further explained that the overhauling operation conducted in two months recently, was responsible for the shortage as they had to shut down operations with the bottling and packaging system to ensure proper overhauling is done in consonance with internationally agreed standards and also in accordance with the manufacturer’s recommendations. He said he is however pleased to announce to the general public that the overhaul operation has ended and all their production operations are fully functional.
Speaking on its Corporate Social Responsibilities, the Corporate Relations Manager said the SLBL has continued to play an important role in the social and economic growth of the country, with support from the Heineken Africa Foundation. He disclosed that they have approved support to Well Woman Clinic at Murray Town for an improved ultra-sound maternity project, implemented a solar-powered water system in Koya, Loko Town and Wellington Industrial Estate, commissioned a Mini Dam at Up Mountain Peacock Farm (benefitting more than 12,000 residents), supporting water and sanitation projects through the Member of Parliament representing Constituency 115, Hon Alpha Bah, support to the Masanga Hospital and Lion Heart Foundation in the north of the country, construction of the Wellington Community Hospital, which will be commissioned after the Ramadan and the Calaba Town Hospital, due to be completed this year. All the above he said is an investment of over Le6 billion undertaken in collaboration with its Heineken Africa Foundation partner.
Production Manager, Dennis Macfoy, disclosed that the overhauling of the bottling packaging line is to ensure efficient service to consumers. This overhauling started from the unpacker, washers (which keep the bottles clean), inserters and fillers. This process ensures that the bottles are washed thoroughly; foreign matters removed and the bottles filled to the stipulated capacity. He further disclosed that in the process of the overhauling, several replacements were done with new machines. He assured the Press and consumers of 99% performance and the best quality of its products. Dennis Macfoy stated that the quality and standard of the products meets all international standards of brewing. He maintained that the shortage of bottled drinks in the 2 months was due to the overhauling process that was taking place and that everything has returned to normal. Both the bottling and canning processes he said are fully operational and guaranteed to meet the demands of the public for years to come.
A question and answer session climaxed the tour.