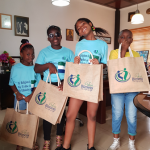 In a bid to boost the Free Quality Education of President Bio, the Executive Director of Pikin Bizness, Dr. Adonis Aboud has said that the institution is working to get kids off the streets and onto the benches of educational institutions. The institution, he said, is also working to stop child labour among other things.

Pikin Bizness is a child based philanthropist organisations that works to support children by providing health related assistance, economic and educational support to the child survivors of the post conflict period in Sierra Leone. The institution focuses its activities on children, who have the greatest capacity to transcend the conflict of their communities and to bring about change in the future. These children within the society offer the best hope for change, and are increasingly amongst the most vulnerable in conflict situations.

Pikin Bizness works and operates in Sierra Leone to create a safe environment where trained key workers can provide a climate of support and mentoring tailored to the needs of children and their environment.

The first three years, in collaboration with WFP, the US Embassy and UNAMSIL, with sponsorship from DSTV/SL, a helicopter was flown country-wide during the Christmas holiday on each of these years, distributing gifts ranging from sweets, drinks, radio sets, school bags, to educational materials to children. Caritas Makeni [a Catholic NGO], International Medical Corp, [IMC] and other NGOs helped identify the children.

Four years later, in 2005, having spotted a campaign launched by the Exclusive Newspaper, advertising and appealing for help for Abu Bakarr Jalloh, a six year old boy with a hole in his heart, Pikin Bizness embarked on a larger campaign targeting mainly children with heart deficiencies, especially children with holes in their hearts and other related diseases.

After the campaign, Pikin Bizness then embarked on a larger campaign in the country to raise funds in order to save the life of a young boy who was about to die. Because being born in Sierra Leone means that you have no chance of obtaining a heart operation let alone a simple non-intrusive sonogram test needed for detecting and diagnosing not only heart problems but birth defects in pregnant women and other health problems. In order to save this boy, donations were made by some citizens and members of Pikin Bizness to facilitate the trip abroad for an open heart surgery.

Even though the organization is non-governmental it works in collaboration with both the Ministry of Health and Sanitation and that of Gender and Children’s Affairs to help develop the health sector and protecting and promoting the right of children in the country.

Pikin Bizness and the Ministry of Gender and Children’s Affairs have succeeded in reducing the number of street children by giving them scholarships for Primary, Secondary and Tertiary levels. Some of these children were taken from the streets and are now living a better life.

With the help of this organization a number of six children’s lives have been saved that suffered from holes in their hearts.

Five children were flown from Freetown to France in order for them to have Open Heart surgery while one went to Germany where he was operated on.

Also, young Francis who was suffering from hydrocephalus was flown to Kenya for treatment. In a most recent development Pikin Bizness sent baby Ngauja to Egypt as he was suffering from lower abdominal wall defect. He is back from Egypt and in great form.

The aim of the organization is to provide economic and social well-being for marginalized children and reduce the number of children living on the streets due to the effect of the civil conflict that the country experienced.