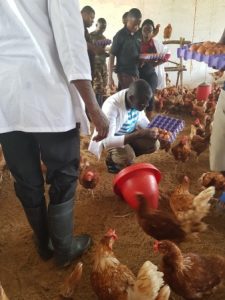 At Yainkassa village, Makari Chiefdom, Bombali District, Northern Sierra Leone, is situated the eye-popping and enviable sites of a fairly large and privately owned agricultural estate of the Faith Healing agricultural project, with over three-hundred and fifty (350) acres of rice farm on one side and over seventy six (76) acres on the other end of the street, cassava and potato on over twenty (20) acres, vegetables on five (5) acres, corn on ten (10) acres, and a poultry of about three thousand five hundred (3,500) chickens respectively.

The farm has huge opportunities to invest in the production, processing and marketing of domestically produced rice, vegetables and poultry which also serves as a great support to locals in over 450 households and help mostly women farmers boost up agriculture.

The cultivators are currently calling on the Government of Sierra Leone and other pertinent stakeholders for support in order to enable them harvest their over 350 acres rice farm and also in realizing their vision to move locals away from managing poverty towards an improved nutritional status and cash income, whilst supporting food security.

During a recent visit to the farm that is presently being harvested for the second time this year, Pa Mambu as he is mostly called stated that for the past weeks, they have been harvesting the rice manually, which is very challenging for such a vast acreage of rice, because they lack machines for harvesting and threshing of rice. He remarked that if only Sierra Leoneans can change their mindsets, hunger and poverty would be a thing of the past.

Speaking to the Press the Director of Faith Healing Agricultural Development Organisation (F.H.D.O), Pastor Francis A. M. Mambu, a renowned preacher/farmer who hails from the South says, “this farm has created jobs for locals in the surrounding villages with women farmer-groups forming the major beneficiaries of not just the farm but also a microcredit scheme providing cash for six (6) villages such as Gbomsamba, Royeama, WorehYeama, Yainkassa, Royanka and Maronkoh in Northern Sierra Leone.

Pa Mambu also highlighted the challenges and needs of the rice farm project such as machinery, finance, fertilizers, tools etc while recognizing the support from the Chief, the people and friends of the farm such as Rev. Steve Harma with his friend Ken Royal of the Ken’s Royal foundation, Arms around Africa, Bread and Water for Africa (BWA), as they have also promised more support to the farm.

The Chief of Yainkassa village, Abdul Koroma while thanking profusely the Director and CEO of F.H.D.O for the good gestures Pa Mambu has extended to them, that has contributed to making their lives better, also added his voice to the call on Government, local and international non-governmental organizations to support the Servant of God whom he said, singlehandedly runs the farm since 2004, stating, “If government boost this farm we are already in heaven…”