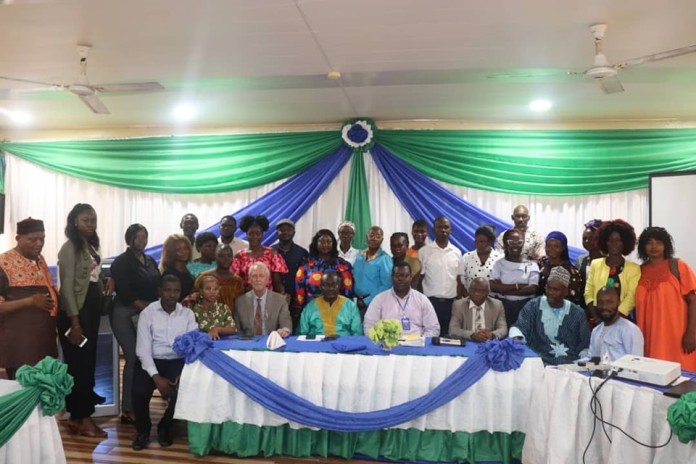 The launching of the United Nations Educational, Scientific and Cultural Organization (UNESCO) African Film Industry Report was done on the 22nd November 2022 by the Ministry of Tourism and Cultural Affairs, under the supervision of its cultural division. It was held at the Council of Churches in Sierra Leone (CCSL) complex, Kingharman Road, Freetown.

This is a novelty for UNESCO to produce an African Film report showing a complete mapping of the film and audio-visual industry in 54 states of the African continent including quantitative and qualitative data and an analysis of their strengths and weaknesses at the continental and regional levels. The report proposes strategies recommendations for the development of the film and audio-visual sectors in Africa and invites policymakers, professional organizations, firms, filmmakers, and artists to implement them in a concerted manner.

In his opening remarks, the Director of Culture, Foday Jalloh intimated that the UNESCO Regional Office in Abuja gave them the privilege to release the UNESCO Regional African Film Industry: trends, challenges and opportunities for growth report. He continued that the launching will be followed by a three-day capacity building workshop for women film and television entrepreneurs which is sponsored by the UNESCO Abuja Office and facilitated by the Ministry of Tourism and Cultural Affairs.

In his welcome remarks, the Director of UNESCO Regional Office in Abuja, Dimitri Sanga appreciated the Government and people of Sierra Leone for accepting to host this regional event and also other Ministers and cultural stakeholders who joined virtually to participate and witness the unveiling. He mentioned that the African Film Industry Report was part of UNESCO’s contribution of the year of Arts, Culture and Heritage of the African Union (2021) and to the celebration of 2021 as the International year of creative economy for sustainable development declared by the United Nations. He added that the African Film Industry Report has attracted comments from critical stakeholders in the cultural and creative industry space. He said that the presentation of the report at the regional level underscores the emergence of Nigeria, Ghana, Liberia and Sierra Leone as frontline players in the ever-growing cultural and creative industries of Africa and the World while calling on stakeholders in the cultural domain to work together and ensure the domestication and effective implementation of the recommendations of the report.

Launching the report, the Deputy Minister of Tourism and Cultural Affairs, William I.K. Robinson thanked UNESCO for the unveiling of the report and also supporting the training workshop as it relates to the empowerment and capacity building of women in the film industry. He maintained the empowerment of film makers resonates with the government’s human capital development initiative; hence he was thrilled to be part of the all important occasion. He called on the participants to take the three-day capacity building workshop seriously and use the knowledge gained to better their lives.

Representatives from UNESCO Office in Sierra Leone, Tertiary Education and other Ministers from Ghana, Nigeria and Liberia all made valuable contribution to the occasion.

CCSL Expresses Alarm & Dismay Over the Eruption of Unwarranted Violence

CCSL Calls on Govt. to Address Challenges of Water Pollution