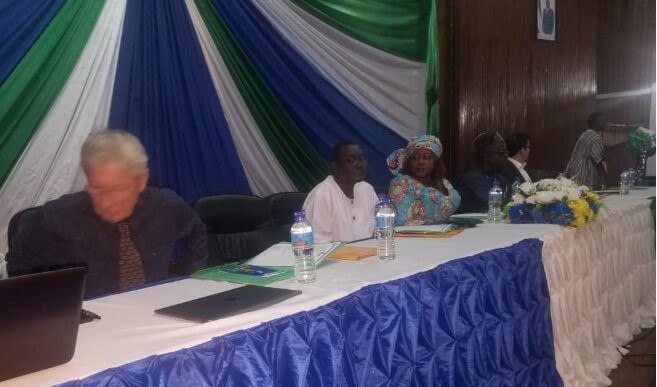 At the Miatta Conference Centre on the 6th February 2020, the Ministry of Tourism and Cultural Affairs and the World Bank held a consultative meeting  to assess about twelve identified tourism sites to be developed in Sierra Leone.

Stating the purpose of the meeting, Director of Tourism, Mr. Mohamed Jalloh, disclosed that the Ministry in partnership with the World Bank, proposes to initially identify five strategic sites among the twelve listed destinations to benefit from what he described as the first phase of the tourism Product Development in the country

Chaired by the Hon. Minister of Local Government and Rural Development, Mr. Tamba Lamina, the World Bank representative, Mr. Christian Quijada Torres said, among other things,, that the organization is always there to work with Governments that focus on development in various sectors.

Mr. Raffaele Gurjon, the World Bank Consultant, technically stated that the sustainability and viability of a market start with its products. He added that a good tourism marketing influences jobs and increases what he termed as “investor confidence,” stressing on the preference to be accorded to women to improve the livelihood of all citizens. He, meanwhile, pointed out the current tourism interest of investors searching for environmental conservation and preservation of heritage sites as he made a comparison between the country’s touristic sites and that of the Caribbean.

The Special Presidential Adviser on Heritage and Culture, Mr. Raymond De Souza George in his statement, observed that “We have been equipped with the evaluation and criteria to market our tourism.” Sierra Leone can display and advertise her products for the world to get attracted to them.

The Hon. Minister of the said Ministry, Dr. Memunatu B. Pratt while acknowledging the dignitaries present, revealed that discussions with the World Bank team started some months ago. Dr. Pratt told participants that this is the first time the Ministry has embarked on such a project with two nationwide surveys done last year on an assessment of the nation’s tourism assets. “We are losing the forests. Sand mining and related human activities that drive away wildlife should be handled holistically,” the Hon. Minister said.

She revealed that the Enhanced Integrated Framework (EIF) criteria have been met by her Ministry. She stressed on inter-agency collaboration and partnership as tourism is highly interconnected with other line Ministries, Departments, and Agencies, pointing out that Sierra Leone is peaceful and currently moving towards being among top ecotourism destinations. She, meanwhile, highlighted proposed tourism projects for 2020 including the long-awaited Budapest-Bamako Amateur Rally, Review of the 1990 Tourism Act and the National Domestic Tourism Declaration.

The next session was consumed by the World Bank team doing PowerPoint presentation on the proposed product development for the said identified sites in a form of clusters as they later received subsequent questions, contributions, comments, etc from participants largely invited from within the tourism sector.