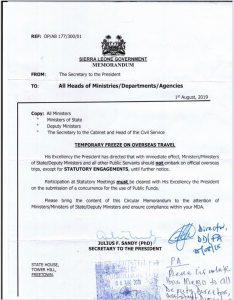 Ministers, Deputy Ministers and other Government officials will no longer be able to travel out of the country without first seeking presidential permission.

This is according to a memo from the presidency, dated August 1 and directed to Ministries, Departments and Agencies (MDAs), said all Ministers, Ministers of State and other Government officials are only allowed to travel for occasions relating to Statutory engagements.

The statement signed by the Secretary to the President, Dr. Julius Sandi, said in any event an official is required to travel for Statutory engagement they must get the approval of the president.

“Participation at Statutory meetings must be cleared with his Excellency the President on the submission of a concurrence for the use of public funds,” the statement reads in part.

Although it didn’t provide any explanation for the decision, the statement will be highly welcomed by many Sierra Leoneans disgruntled with the state of affairs under the administration led by a president who campaigned to cut down on spending.

It is widely believed that many officials are in the habit of traveling to pocket more per diem allowances.

But there are many other Sierra Leoneans who are not likely to be moved by this, given that the president has been accused of being the most widely travelled Sierra Leonean president.

President Julius Maada Bio, as opposition leader, criticized his predecessor for his frequent travels, which he promised to cut down on. But former President Ernest Bai Koroma’s supporters say the new president has travelled to more places in less than two years than the number of travels Koroma made in the entirety of his first term of five years.