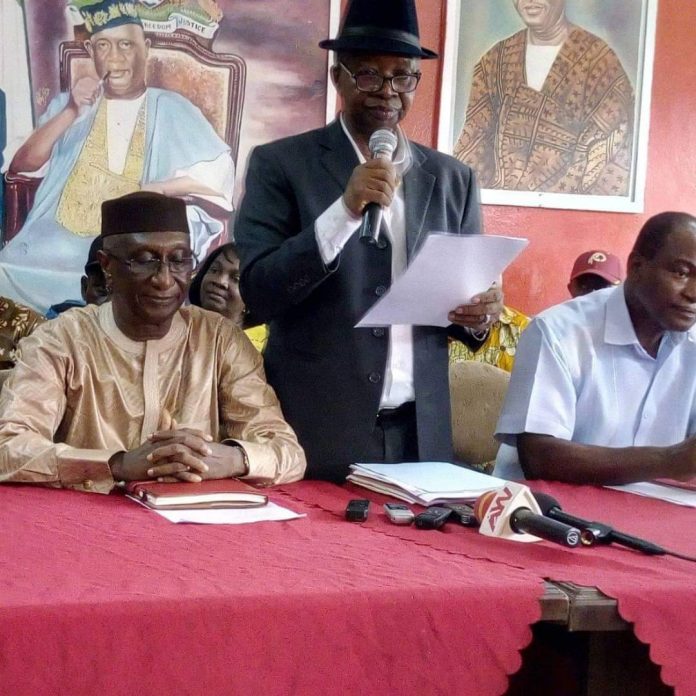 Freetown 29th January – The National Secretary General of the Majority Party in Sierra Leone’s House of Parliament , the All Peoples Congress(APC), has said that, the Party, as a democratic political institution, is fully ready to comply with the Bio led government for the judge led commissions of inquiry to go on as planned…, should the government adhere to constitutionality.

Ambassador Dr. Alhaji Osman Foday Yansaneh while addressing a news conference on Tuesday affirmed that the three instruments, which passed into law through the House of Parliament by, contradict Section 150 of the 1991 Constitution of Sierra Leone.

*Yansaneh said the country, as far as the APC is under Constitutional rule and that the APC will obey the rule of law and not the rule of man. He said the APC having rolled out development projects across every nook and cranny of the country cannot be a party to war rather It is ready to face the full penalty of the law for constitutionality.*

The Party, in a press conference on Tuesday, signed by the National Secretary General, says ”its notes with utmost dismay that the Government of H.E. Rtd Brigadier Julius Maada Bio has today, Tuesday 29th January 2019, launched the Commissions of Inquiry (COI) without taking due note of the concerns raised by the All Peoples Congress (APC) Party and other bodies including the Sierra Leone Bar Association, other Political Parties, Civil Society Organizations (CSOs), the Inter-Religious Council, All Political Parties Association (APPA) among others.”

”The APC Party hereby wishes to reiterate its concerns relating to the constitutionality or otherwise of the COI,” the release states, highlighting the concerns of the APC which include but not limited to ” That the instruments establishing the COI are not consistent with the provisions of Section 150 of the 1991 Constitution of Sierra Leone which states “Subject to the provisions of this chapter, the Rules of Court Committee shall, by constitutional instrument make rules regulating the practice and procedure of all Commissions of Inquiry.”

The APC Party is of the view that this committee was not constituted prior to the enactment of the Constitutional Instruments referred to, according to the release.

The release adds: ”What is more worrisome is that in Section 6(1) of the Constitutional Instruments 64, 65 and 67 the Commissioner has powers to modify, adapt and except himself from abiding by the practice and procedure in force in the High Court if he so feels like it. ”

This, according to the release, is in sharp contrast with the provisions of Section 150 of the Sierra Leone Constitution.

The APC Furthermore, according to the release, cited Section 6(2) of the said Instruments, it is stated that “the Commissioner shall not be bound by the Rules of Evidence in civil or criminal proceedings”.

This, the release affirmed, is also against the spirit and content of Section 150 of the Constitution of the Republic of Sierra Leone.

”We also note with concern, that Section 149, subsection 4 of the 1991 Constitution of the Republic of Sierra Leone, provides that “Where a Commission of Inquiry makes an adverse finding against any person which may result in a penalty, forfeiture or loss of status, the report of the Commission of Inquiry shall, for the purpose of this Constitution, be deemed to be a judgement of the High Court of Justice and accordingly, an appeal shall lie as of right from the Commission to the Court of Appeal”.”

”The APC Party is concerned that this provision gives the Commission the status of a High Court which can recommend penalties that are enforceable by law. The Rules of Evidence applicable in the High Court should therefore apply.”

The APC, according to the release believes that the source document for the Commissions of Inquiry, ie, the Governance Transition Team (GTT) report 2018, is replete with tribal, regional and partisan sentiments and incitement and therefore poses a serious national security threat.

”The APC Party is even more appalled that in his statement at the launch of the Commissions of Inquiry, the Chief Justice of the Republic of Sierra Leone, who is expected to be the custodian of the Rule of Law in the country, has seemingly taken a partisan position that is firmly consistent with that already taken by the President and his Government.”

The release is concluded by stating APC’s unrelenting wishes to reiterate its position on the Commissions of Inquiry, ”that its membership is ready and prepared to fully support and cooperate with the Commissions if the aforementioned concerns are addressed.”

In related development, Civil society activists who have contacted We Yone this evening have raised concerns over what they described as a disturbing situation.

The civil society activists, who prefer condition of anonymity as that last evening said even the judges that are ferried into the country for the commissions of inquiry have not been briefed.

They are of the view that the 1991 Constitution of Sierra Leone should be considered given the public has every right to know the academic and moral credentials of the judges, in that, several state institutions of Sierra Leone will be probed. They also cited reference to Section 23 which had to do with the protection under the law. They say anyone going through the commissions of inquires as constituted presently by the Bio led government will not be protected under the law, which they say is a fundamental requirement in any democratic country.

Section 23 is a rigid entrenched clause in the constitution which cannot be changed by anyone not even the President or Parliament. Section 108 of the same constitution clearly states so.

They stressed that the right to fair trials as in Section 23 of the 1991 Constitution is also an absolute right that is recognized in international and national human rights laws.

”In no circumstance can any Sierra Leonean be subjected to an unfair trial as fair trial is the hallmark for Human Rights Law and International Humanitarian Laws in the world,” they concluded, while calling on the judiciary to save the country from what they described as constitutional crisis.