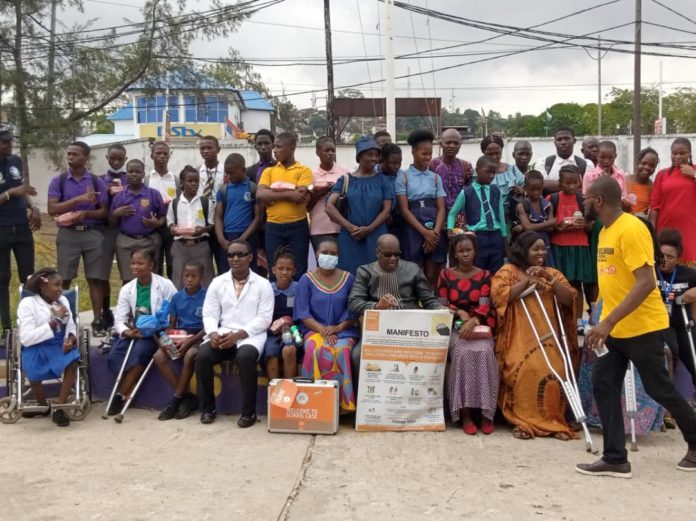 During a well-attended ceremony held on Friday 13thMay 2022 at the Collegiate Senior Secondary School in the West End of Freetown, One Family People presented key findings on, “We Ring the Bell Campaign 2022”, bringing out some of the challenges persons living with disability face in schools to stakeholders present.

One Family People,  in collaboration with the Ministry of Social Welfare, the Special Needs Education Unit of the Ministry of Basic and Senior Secondary Education and with support from the Liliane Fonds hosted “We Ring the Bell” Campaign 2022” to mark the Global Action Week for Education on the theme: “Education in Emergences and Protracted Crisis-How to Keep Children with Disabilities in the Picture”

The goal of the campaign is to call on Government, Stakeholders/Duty bearers to take radical action in ensuring children with and without disabilities have access to education and are able to learn together in an inclusive environment with reasonable accommodation, adaptability and huge acceptance.

Speaking during the ceremony, the Ambassador of Young Leaders Generation, One People Family, Dorian Sumu, said that One Family People and partners hosted the “We Ring the Bell” Campaign 2022” to mark the global action week for education, adding that during the campaign they visited Primary and Secondary Schools across the country in order to raise awareness in ensuring children with and without disabilities gain access to education.

He outlined that, during the campaign in the various schools, they also conducted an accessibility report on how disable friendly are schools stating that from their assessment the different schools they visited are not disable friendly.

He concluded by calling on the Government to undertake a radical action in ensuring children, with and without disabilities, have access to education and are able to learn together.

On his part, the Assistant Director of Special Needs in the Ministry of Basic Senior Secondary Education (MBSSE), Mohammed S. Jalloh, assured persons living with disabilities to assert and exercise their right to education in various schools across the country.

He said persons with disabilities have equal right to education so that they would not fail like others further revealing how the Collegiate School is one of the schools in the country that accommodates pupils from Blind School, adding that the school lacks the avenue or basic necessity such as equipment to train persons with disability.

He urged for a special training to be conducted for pre- school teachers and to pass on knowledge to children with disabilities more especially those in schools.

He further encouraged the Ministries of Education and Social Welfare to organize more training and provide more equipment for children with special needs.

Vice Principal of Collegiate Senior Secondary School, Mohamed I. Sesay called on the Government to add value in educating persons living with disabilities in the country, adding that Collegiate school is the only school that accommodates children with disabilities.

Representing the National Commission for Persons with Disability, Madam Rosetta K. Koroma, stated that her Commission knows what is happening with children living with disabilities in Sierra Leone adding that they also need education and they as a Commission  will ensure that they gain better access to education. 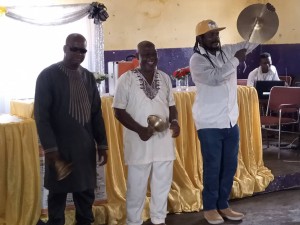