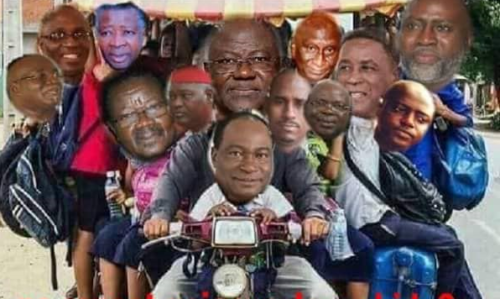 Sometimes one will not want to say anything for a moment, especially on the country’s political and social issues because of personal and family commitments. But because of the patriotic instinct that always urge you to say something, you have no alternative but to take your laptop or prepare an audio or video clip to start saying something for the benefit of the nation and others.

However, before I will start saying something, I must say a big sorry to my brothers and sisters’ Sierra Leoneans, especially the truly born patriotic Muslim Sierra Leoneans in and out of the country. In case along the way, I say something that may not go down well with you. It’s because of the overzealous fanatic extremist inhumane religious so-called Sierra Leonean Muslim politicians that always turn blind eyes on the truth because of self-interest.

In view of that I will start to say the following words without any remorse. That many Sierra Leoneans are too full of evil, hate, jealousy and bad heart against their fellow Sierra Leoneans, particularly if they are not in the same stupid boat journey with them.

They always find it very difficult to control their evil thoughts at the expense of the poor suffering nation, particularly whenever there is a burning issue in the country that needs a concerted effort to solve it.  It’s the time you will hear these enemies of the country’s peace ranting all over the place with the pretexts of defending the un-defendable to please their kith and kin at the detriment of the hard-earned peace in the country.

Here is a current case of evil thoughts, hate, jealousy in a broad day light been exasperated by some satanic evil Sierra Leone that called themselves Muslims against their brothers and sisters because of their devil incarnation skins. Outside you see them like human beings. But inside them is demonic.

The recent issue of the two high profile gentlemen, Dr. Judleh Jalloh, the Vice President of Sierra Leone under the SLPP and Dr. Samura Kamara, the former flagbearer of the APC in the mosque is a case in point on how some Sierra Leoneans are stepping on the truth.

How can a Vice President of a country visit a mosque or church without informing the authorities of that place for his accommodation and security?

Sierra Leoneans both home and abroad became judges and magistrates on an issue where they were not present. Just because of the demonic evil hate that always linger in their unpatriotic political minds against their peaceful fellow Sierra Leoneans. They Judged Dr. Sumara Kamara by telling him that he is a “drunkard”.

Therefore, the Mosque authorities should not have allowed him to enter the Mosque. They were also calling all sorts of demeaning names against the authorities of the Mosque because of political hatred and jealousy at the expense of the noble Islam religion. Just because they did what is right in the sight of God.

But the question for those Islam fanatic extremists that have been lambasting or passing judgement against Dr. Samura Kamara and the Mosque authorities is, are they saints or angels that do not sin? Are they not sinners like some of their fellow Sierra Leoneans that they are passing judgement on? I am asking these questions because the two Holy Books, the “Bible and the Quran” tells us that we are all sinners because of the sins of “Adm and Eve”.

Minus been born with sin, what about their own personal sins that they are always committing behind the scene, such as lying? Telling lie stories, gossiping, defaming others, defending the undefendable are they not sins? What about profiteering, fornication and adultery that they are committing 24/7 in diverse ways at the same time calling themselves Muslims? Is sin (s) only for those that drinking rum? It’s a complete fallacy. Therefore, it’s a satanic way of think Mr. aggressive extremist Muslim.

Brothers and Sisters, please be careful, especially you that calling yourself Sheik or Iman. Don’t allow your political evil hate, tribal and regional sentiments to over come you. Always learn to control your political hatred and jealousy emotions. Stop condemning others. The two Holy Books also tells us that we should not judge or pass on judgement against our fellow men, especially in terms of the individual way of life on earth. Because you too also have to be judged by the same Almighty God.

In view of that why are you becoming so emotional and fanatic extremist because of the borrowed wicked Arab culture, including their language at the expense of your brothers and sisters’ Sierra Leoneans? It is an open secret that the very Arab that you are always trying to copy from or impress they have no respect for you, especially because of your skin colour. Sometimes when they see you, they spit racist spit.  Look at some of the inhumane treatments that some of our brothers and sisters are facing in some of the religious countries that ISLAM came from. They are generally wicked souls.

To you the politician Sheiks or Imams, I want you to know that there is a day of judgement for you, especially for misleading the people, particularly your followers because of political selfish interest. You will have to go and give account of your corrupt deeds on earth. I rest my case to God, to take control of my powerless and defenseless suffering people in the country.