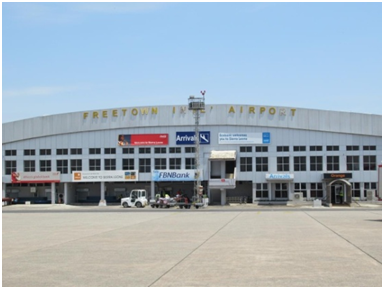 A US$25 Airport Security Fee took effect on the 1st September, 2022 for Inbound and Outbound passengers passing through the Freetown International Airport at Lungi each way.

This new airport security fee came into effect after the Government ceased, at the end of August this year, to pay for the security services provided at the airport for passengers and for now it is expected that passengers are to meet the cost of the said services.

However, considering the adverse impact of the world economic crisis on the country’s economy, the Government says it can no longer meet the initial service cost of US$40 for each inbound and outbound passenger.

Accordingly, the Government of Sierra Leone engaged the management of SECURIPORT to re-negotiate the cost of their services per passenger.

The re-negotiated fee for both inbound and outbound passengers is US$25. The agreed fee will be paid by each passenger through an on line platform/digital payment system to be developed by SECURIPORT.

The fees collected by SECURIPORT will allow authorities to utilize cutting-edge border control technology tools to ensure the safety of passengers, airport installations, and other airport related hardware and equipment.

With the transition payment of US$25 could be done through the following payment facilities: Orange Money, AfriMoney and Online or through EcoBank, UBA and SLCB.

Securiport is one of the leading airport security service providers in the world with branches across Europe, Asia and Africa.