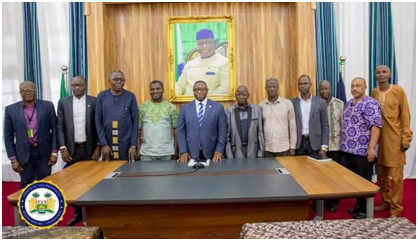 President Julius Maada Bio met with members of the Sierra Leone Labour Congress on the 30th August, 2022, during which he intimated that although bad politics seems to be dividing the nation, he has set out on a nationwide engagement with critical groups to sustain dialogue.

The President reminded them of the many previous engagements he had had with them but emphasized that he was meeting them again because of what happened on 10 August 2022, the violence that shocked the nation and shook its democracy, peace, and stability.

“Because it is a national issue that affects the entire country, its image at a global level, especially with our track record as a beautiful nation and we have come from war and agreed that violence should never be a portion of addressing our grievances,” he said.

He said because they knew that society would never grow without security, as a Government, they are now paying closer attention to that, adding that he is looking forward to hearing from the Sierra Leone Labour Congress on the way forward.

“When something is violent, let’s learn to call it violence. And when something is bad, let’s just call them by their name. We must not sit by quietly. We have a Commission that is in charge of peace and national cohesion because we are aware of our background as a country,” he noted.

The President insisted that the August 10 incident was not a peaceful protest but an insurrection and bad politics demonstrated by a few Sierra Leoneans and reminded the interest group that his Government believes that in a democracy elections timelines should be predictable, which was why he had announced the date for elections a year earlier.

“My Government is building schools to educate our children so that they will be beneficial to the State, and not to give them drugs and money all in the name of taking them to the streets. We are spending billions of Leones to make sure they become better people. Our programmes are clear on development targets for every Sierra Leonean child. We have very smart kids nationwide, and we have every reason as a Government to share that opportunity with our children,” he underscored.

He, therefore, called on the Congress to denounce all forms of political bigotry and hate speech that have the tendency to undermine the democracy, peace, and development of the nation. He said tribalism should not be part of the nation’s development equation, pointing out that “you don’t have to be a President to condemn bad politics. We don’t need to kill ourselves all in the name of politics”.

President Julius Maada Bio called for a national debate that would be based on ideas, development policies and programmes in an ideal manner, instead of preaching hate and urged all critical groups to come forward with solutions that could end the sad memory of August 10.

Secretary-General of Sierra Leone Labour Congress, Max Conteh, said that they didn’t believe in violence and will always condemn it in its entirety, adding that they believe in dialogue, as demonstrated by the invitation to State House. He assured the President that they would always be supportive of his Government and would also never sabotage its work, nor would they engage in anything that might undermine the central Government.

“Sierra Leone is our country. We believe in it. I have no comfort living in another country other than Sierra Leone, because of the freedom. I also want to assure Your Excellency here that nobody within or outside the country has the power to influence workers, traders’ unions, or the Sierra Leone Labour Congress. Never,” he assured.