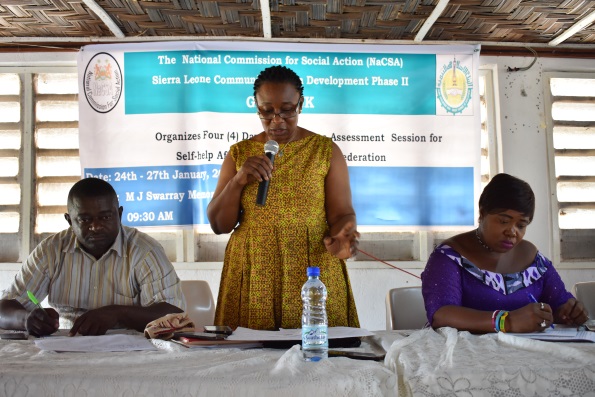 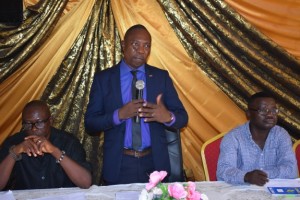 The National Commission for Social Action (NaCSA), in partnership with one of its project consultant, MYRADA- an International Livelihood Development Service Provider based in India has concluded a 17-day nationwide training workshop for NaCSA field staff.
The team, who were in the country from the 22nd January 2019 to the 9th February 2019 were tasked with the responsibility to jointly review, with NaCSA, the performances and statuses of old and new Self-help Affinity Groups (SAGs) (118 +205); to assess the various Federations and enhance their capacities to support suitable SAGs to morph into Microenterprise Groups (MEGs); and to train NaCSA field staff on the preparation of business plans, concept notes and common entrepreneurship skills and concept, specifically for the SAGs using Business Model Canvas methodology .

Declaring the session opened in Bo, the NaCSA’s Deputy Commissioner Dr. Sao Kpato Hannah Isata Max-Kyne revealed that, the Sierra Leone Community Driven Development Project phase II (GIETRENK) resonates with the Government of His Excellency the President, Dr. Julius Maada Bio’s New Direction in the area of women empowerment and access to small and medium capital to enhance micro enterprise development. She also noted that other components of this project clearly support the government’s flagship program, which is the attainment of free quality primary and secondary education; and is also in tune with other priority areas, including health, water, hygiene and sanitation, and renewable energy .
She further stated that the estimated cost of the SLCDD 11 is US$51.93 million, with the Government of Sierra Leone contributing US$5.25 million as counterpart funding.
NaCSA Micro Finance Officer, Martha Macfoy gave the overview and purpose of the workshop, emphasizing that the continuation of capacity building for NaCSA staff by MYRADA is key to the implementation of the project, which she noted will in turn benefit the targeted beneficiaries in the various communities.

Speaking on behalf of the Bo District Council, Councilor Abu Bakarr C. Foray of Ward 291, Jaiama Chiefdom, expressed his council’s appreciations to NaCSA for transforming the lives of the people in various communities in the District. He further confirmed that NaCSA is a household name in Bo District and highlighted some of NaCSA’s interventions in the district, including road construction, agricultural cultivation, cash transfer etc.
The training was held in five districts (Bo, Moyamba, Kenema, Port Loko & Tonkolili) and was facilitated by four Indian MYRADA Consultants. Training modules delivered include- development of business plans, prioritizing business activities, customer segment and value proposition, identification of customer channels and developing strategies to build customer relation, which is key aspect of this project.

The training exercise was replicated in each growth pole district headquarter town and was combined with field visits to communities, including Masingbi in the Tonkolili District, Gbinti in Port Loko District, Sembehun Nancy Tucker in Moyamba and Panguma in Kenema District.

Climaxing these activities was a debriefing session held at the Commission’s Headquarter in Freetown, where detailed presentation on the outcome of the exercise; activities undertaken, observations from the mission and their recommendations were presented by MYRADA to senior officials of the institution.