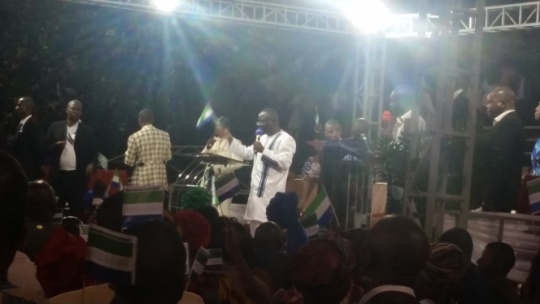 Pastor Francis A.M Mambu, the General Overseer of Faith Healing Bible Church-worldwide has expressed disappointment over the low turnout of Sierra Leoneans at this year’s national thanksgiving ceremony held at the National Stadium, Friday, February 22nd 2019, compared to last year’s.
The Servant of God noted that on February 2018 – a month before the controversial general and presidential elections, when the nation almost sensed some amount of chaos, many Sierra Leoneans went to the Siaka Steven Stadium to seek the intervention of God through repentance. “This year in February, only few returned to thank Him for the peaceful outcome of the elections, “referencing the one leper who returned to thank the Lord Jesus Christ out of the ten He healed: Luke 17: 11-19.
Many among the few who returned to thank the Lord for answering their prayers were girls, young men and women. Asked why the dominance of women, Georgiana M.T. Harding of 12 Wilkinson Road, Freetown, responded that “women had closely been with Jesus Christ when He was alive; unto His crucifixion, burial, and were the first to discover His resurrection from the dead. This is why we have always been in dominance appearing to love Him than men”.
In spite of the low turnout, cabinet ministers, Members of Parliament and the leader of the main opposition All People’s Congress Party-Dr. Samura Mathew Wilson Kamara were in attendance. The Mayor of the Freetown Municipality-Yvonne Aki Sawyer was absent, but represented by a Ward Councilor who made a statement on her behalf.
A very interesting poem about Sierra Leone was read in absentia by the Minister of Works, Housing and Infrastructure-Raymond De Souzza George, who was represented by his wife. According to Pastor Mambu, “this year’s thanksgiving ceremony has been the first to host a considerable number of politicians, indicating God’s readiness for a turnaround of the nation”.
The thanksgiving ceremony marked the end of the twenty one days of national prayer and fasting, where Men and Women of God from various denominations offered strategic prayers of thanksgiving for the three arms of government: the Executive, Judiciary and Legislature; the peaceful outcome of the March 2018 general and presidential elections and the nationwide stability; Ministries, Departments and Agencies including the economy: investors, mineral resources, banks and related financial institutions; the Local Government Ministry and functionaries: Provincial Secretaries, District Officers, Chief Administrators, Mayors, District Council Chairpersons and Councilors; the Judiciary: Attorney General and Minister of Justice, the Chief Justice, Judges, Magistrates, Lawyers, Magistrates and Local Court functionaries; the Foreign Affairs Ministry: International Community and Diplomatic Corps, Embassies and Sierra Leoneans living in the diaspora; the Health Ministry: Nurses and Doctors; the Human Resource development; individual homes and families including the youth, aged, and married couples; the Law Enforcement Agencies: Police, Army, Fire Force, Auxiliary Security Agencies, Chiefdom Police, Correctional Service Officials; Patriotism: the nation in entirety, and the Body of Christ-SL, to name but a few. The all-night thanksgiving ceremony was segmented into four phases, coupled with twenty one prophetic trumpet blasts signifying victory over the powers of darkness that are believed to have seated on the nation’s destiny. 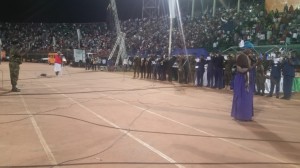