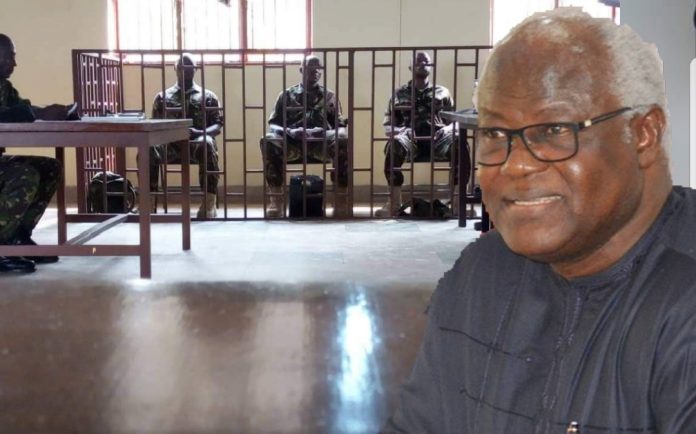 The first accused in the military court martial trial involving ammunition discovered at the Presidential Lodge in June 2018, Captain Patrick E. Kamara has started giving evidence in his defense. Testifying before Justice Alhaji Momoh-Jah Stevens on Tuesday 2nd April 2019, the accused tendered a series of documents in his defense.
He said he worked at the Lodge between 2009 to April 2018 and that he left the premises he occupied on the periphery of the Lodge on 3rd April 2018 after the election. He said he went to the Lodge after he vacated the premises. He said he came to the Lodge because the entire guard force for both the President and Vice President were on 24 hours duty.
Kamara said on 7 April 2018 he was called by Brigadier General A.Y. Kargbo to do a back loading of arms and ammunition that were in the stores controlled by the former President. He said during the back loading, a comrade, Captain James Robin and himself were in the store issuing the ammunition to other soldiers who transported them to the vehicle where Brigadier General Kargbo received it at the vehicle.
The accused said during the back loading it became apparent that the 12.7mm A.A. that were back loaded came from different countries. He gave a detailed description of the records he took during the back loading stating that 3,000 of 14.5 mm A.A. were issued to the Force. He added the same were back loaded.
He further stated that 5,000 of the 12.7 mm A.A. were issued however 4,920 were back loaded. The accused also identified his voluntary caution statement to the police stating that during the investigation, he was not informed of his right to legal representation.
He also said there were training and test firings being conducted in 2009 and 2013. He said when he was deployed at the Presidential Guard Force in 2009, the officer commanding the force by then wrote for training exercises for personnel and also to test fire the heavy weapons. The training for the personnel in that year was done at the now Peace Mission Training Centre at Hastings.
The firing exercises were moved to the Armed Forces Training Centre at Benguema. He tendered a series of documents relating to the trainings. The accused, Captain Patrick E. Kamara is jointly charged with Samuel Conteh, a Warrant Officer Class One, and Abu Bakarr Jalloh, a Warrant Officer Class Two. The three were believed to be senior officials of former President Koroma’s guards.
Between 1 January 2008 and 19 June 2018 in Freetown, it is alleged that Captain Patrick Kamara, Samuel Conteh, a Warrant Officer Class One, and Abu Bakarr Jalloh, a Warrant Officer Class Two, conspired and stole from the Government of Sierra Leone, 4,245 rounds of 12.7 millimetre anti-aircraft (AA) rounds of ammunition, 3,828 rounds of 14.4 millimetre AA rounds, 11 grenades and 6 rounds of 7.62/39 millimetre gun, 14,100 rounds of 7.62/39 millimetre tracers, amongst many others.
The trio are before a military Court Martial to answer to five charges, ranging from Conspiracy, Larceny by Servant, Willful neglect and ordering damage to service property, willful damage of service property, and conduct that was prejudicial to the group order and military discipline contrary to the Armed Forces of the Republic of Sierra Leone Act No.34 of 1961, as amended.
First accused Captain Patrick E. Kamara is represented by lawyer Ady Macauley, and D. Taylor represents the second accused, Samuel Conteh. Third accused Abu Bakarr Jalloh is represented by Amadu Koroma.