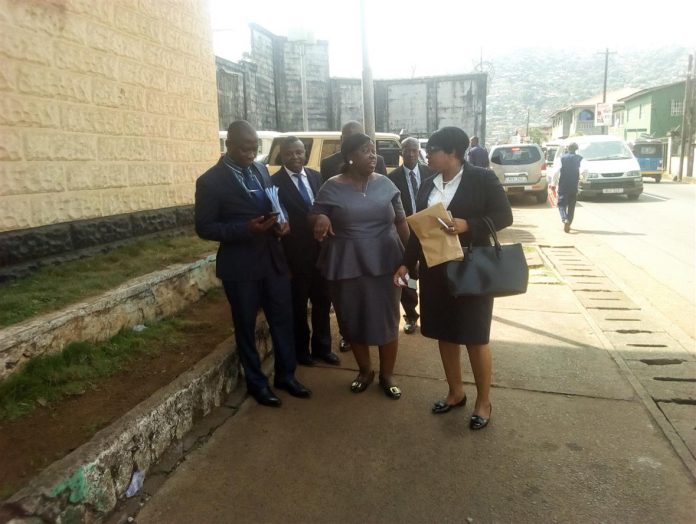 Ibrahim Macauley and Yusifu Kamara ,the two longest serving remand inmates at the Pademba Road Correctional Center and by extension the country were on Tuesday, 26 March 2019 discharged for want of prosecution. This follows a habeas corpus application by Legal Aid Manager Cecilia Tucker.
Mohamed and Yusifu were not served indictments since 2009 up to the date of their discharge on 26 March 2019.
Both were charged with murder and conspiracy to murder. They were arrested in March 2009 for allegedly murdering a man and then stealing his motorbike. A charge they both deny. The matter was committed to the High Court by the then Magistrate Binneh Kamara of the Waterloo Court.
They were remanded at the Pademba Road Correctional Center for ten years without indictment. The first accused in the matter, one Amadu Kamara died at the Pademba Road Correctional Center in 2016. Yusifu Kamara on the other hand suffered partial stroke during his incarceration as a result she cannot walk or talk properly.
The Legal Aid Board started providing assistance to the two in 2016. 31 inmates have so far benefitted from the habeas corpus applications which is targeting those who have been remanded since 2009 up to 2015. Fourteen have so far been discharged for want of prosecution, while one has been granted bail.
Those discharged include Mohamed Bangura who had been remanded without indictment for six years at the Pademba Road Correctional Center. Mohamed had a surprised reunion with his mother at the Legal Aid Board office in Freetown following his discharge last week. Mohamed’s mother came to Legal Aid Board office for her regular follow-up visits and to her pleasant surprise found her son has been discharged unbeknown to her. It was an emotional scene as tears of joy flowed.
Mohamed was charged with Conspiracy and had been at the Pademba Correctional Center since March 2013.
The Executive Director of the Legal Aid Board, Ms. Fatmata Claire Carlton-Hanciles praised the Chief Justice Babatunde Edwards for his support to the Board in ensuring that the applications are handled in a speedy manner.
‘We are happy to have a defence minded Chief Justice and this is something we will take full advantage of to ensure our clients have justice in a fair, speedy and equitable matter and also ensure they do not have to suffer through no fault of theirs ,’ she said.
Ms. Carlton-Hanciles also lauded the efforts of the Chairman of the Board of Directors of the Legal Aid Board Hon. Justice Miatta Samba who has been keenly following the whole process as she had visited the Pademba Road Correctional Center last December during which she met with inmates including the ones released on this application.