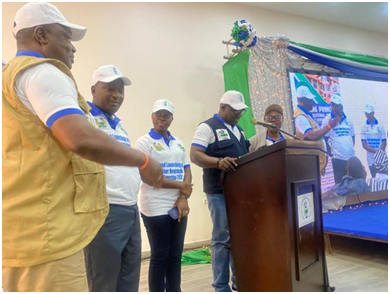 The voter registration exercise has been launched by the Electoral Commission of Sierra Leone on the 24th August 2022 at the New Brookfields Hotel in Freetown attracting Government Ministers, Members of Parliament, Political Parties Representatives and members of the diplomatic community. The voter registration process will start on the 3rd September, 2022 and will end on the 3rd October,2022.

Chairman of the launching program, Dr. Julius Spenser,   underscored that voter registration is very important in any electioneering process maintaining how it is a civic responsibility.

Dr. Spenser informed that since 1996 Sierra Leone has conducted five (5) elections that have been accepted as fair noting that citizens should express their will in the ballot box while urging NEC to give the opportunity to people to participate in the process.

The Director General of the National Telecommunications Commission, Daniel Kaitibi stated that the Commission is pleased to partner with ECSL disclosing how they have engaged telecommunications service providers to provide support in sending out information on the registration processes.

Chairman of the Political Parties Registration Commission, Abdulai Masiyambay Bangurah said they will continue to collaborate with ECSL for a smooth election process and called on Political Parties to participate fully in the process.

He reminded political parties that the Electoral Commission has not declared campaign open and should be mindful of that in order to play the game by the rules.

The UNDP Resident Representative said that he was pleased to witness the voter registration launch adding that over the years, Sierra Leoneans have participated in the smooth handing over of power from one Government to another adding that voter registration is the foundation to any successful election further urging that the process must  be inclusive by leaving no one behind.

Jacob Jusu Saffa, the Chief Minister,   reminded the gathering that months ago, President Bio formally announced June 24 next year as election day in the Republic of Sierra Leone furthering that Government is committed to its responsibility of giving ECSL the required support needed.

He disclosed that Government takes the EU Election Observers recommendations seriously and encouraged Sierra Leoneans to be law abiding in order to ensure that the Electoral Commission carries out its responsibilities.

The Chief Electoral Commissioner, Mohamed Kenewui Konneh, speaking at the launch of the voter registration said that registration is very important for citizens adding that his Commission believes in partnership and collaboration with other institutions.

“Today marks a significant day in our electoral circle and since the proclamation of the election date the Electoral Commission of Sierra Leone has been working,” he stated.

He expressed delight in the manner the Commission is moving to get the electoral process right stressing how the Commission has a constitutional mandate to register eligible voters and those who will be 18 years old by the 24th June, 2023.

He also informed that the Commission is working with the security sector for a peaceful registration while urging Sierra Leoneans to go out and register.