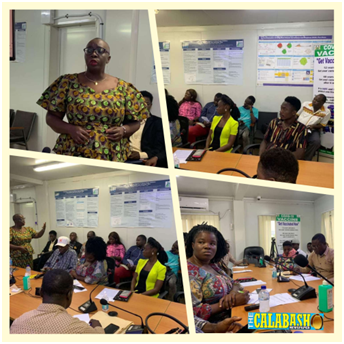 In an effort to deal with the health risk of contracting rabies as a result of the growing number of stray dogs in the country, the Initiatives for Media Development (IMDev), in collaboration with Breakthrough Action, and with funding from US Aid, on Tuesday, August 23, 2022, held a one-day orientation for journalists on rabies awareness campaign at the EOC Building at Cockrill Headquarters on Wilkinson Road in Freetown.

According to the Founder and Executive Director of the Initiatives for Media Development, Yeama Sarah Thompson, the orientation is geared towards equipping journalists with the knowledge they need to properly inform the public about the rabies virus, its prevention and how to treat it if a dog bite results into contracting the virus.

She said since journalists are the custodians of information, health professionals cannot function without them because they have limited capabilities for disseminating information.

Yeama called on journalists to assist in educating the public about the threat of rabies or dog bites anticipating that by choosing to devote time for public service announcements, media outlets will create the circumstances for enhancing population health.

The following are the main behaviors that the campaign is trying to promote, according to Fatima Bockarie: Dogs should not be disturbed, especially when they are resting, feeding, or with their young, in order to prevent dog attacks, to be cautious while approaching or entering a home where a dog is present, to avoid dogs who are acting strangely or who appear unwell, and get assistance from an animal health professional, a community health worker or Call 117, that if you are bitten by a dog, you should immediately wash the bite with soap and water 20 times or for at least 15 minutes, next is to  head straight for the hospital.

The Programs Officer of Breakthrough Action, John Idrissa Koroma, said over 400 dog bite incidents were recorded nationwide which he said indicates the importance of the issue and the necessity to concentrate on it for the sake of the nation’s health.

He claimed that by exposing journalists to these behaviors, they will be better able to report on some of the problems related to rabies and dog bites as the campaign advances.

One of the facilitators, Mohamed Conteh, said rabies is a fatal illness and it is real claiming many lives but has not received much attention from the general public.

He said it is endemic, contagious and lethal which is spread to humans through the saliva of infected dogs and causes insanity and convulsions.

According to research, rabies claims the lives of about 210,000 individuals each year, making it one of the leading causes of human death worldwide. This equates to three fatalities for every 100,000 people each year.

US Ambassador Updates the Press on the Embassy’s Recent Activitie