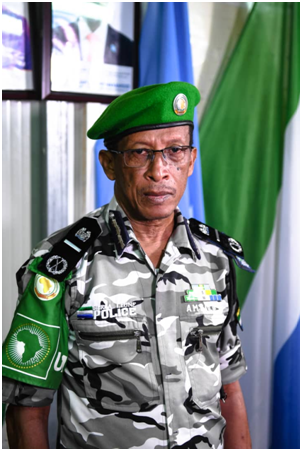 Commissioner Augustine Kailie, the current serving Chief of the African Union Multinational Police Force in Somalia has been endorsed by the Police Council as Deputy Inspector General of Police and he is expected to round up his mission in Somalia and take up his new role in the next coming days.

Commissioner Kailie oversaw the operational planning and security of the recent concluded Parliamentary and Presidential elections in Somalia. He held various command and operational positions in Sierra Leone and holds a Bachelor’s degree from FBC and a Masters degree in Peace Development Studies.

Given his wealth of experience and professional career including his educational background, his appointment was widely appreciated by his colleagues in the SLP and the African Union.