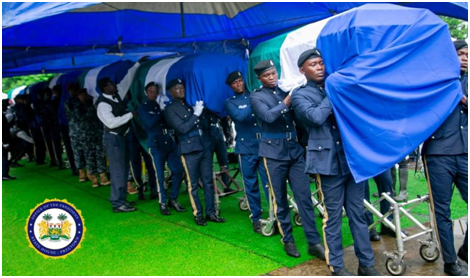 President Julius Maada Bio joined family members, the Sierra Leone Police, and the nation at the Police Training School at Hastings on Tuesday 23 August 2022 to lay the remains of six police personnel killed on August 10 and called on the country to unite in honour of their service to nation.

“This is a sad day in the history of our country, as we come to give our final respect to the victims of a violent and brutal attack on our peace and democracy. We have worked very hard as a nation and for nearly two decades. We thought violence was completely taken away from the tools that would be used to resolve our differences,” he said.

“These individuals have not hidden their plan. It was widely discussed and was and still is supported by political entrepreneurs who have no interest in the people of this country but to extract from the state. The common interest of the people was completely missing in their calculus”.

The President, however, assured the gathering of his personal and Government’s commitment to protecting the interests of the country, citing his military service before he became President. He added that the six police personnel were killed for the crime of choosing to serve their country by protecting lives and property.

He called on all Sierra Leoneans to be united and keep the peace, stating: “We can keep the peace. We can be a normal society like all other nations. This was what our brothers were fighting to maintain, just to make sure we lived in safety and peace. They have paid the supreme sacrifice by doing that”.

He warned that as a nation the best they could do for the six deceased police personnel was to decide, as a nation, to make a firm commitment to peace, unity, and to abide by the law, adding that democracy was here, and was here to stay, with all its freedom accompanied by it.

He assured the bereaved families that his Government would investigate and take to task all those who had committed those horrendous crimes on August 10, 2022, reiterating that the country and its people could not develop if they were not united and therefore could not achieve much without the rule of law.

The President called on all Sierra Leoneans to unite, especially against those people using social media to destabilize the nation, undermine its peace and cohesion, and preach tribal bigotry. He called for a national uprising against all forms of divisions and unrest.

On behalf of the bereaved families, Nannah Barrie said: “Our family dreams have been shattered. We are devastated. We are now orphans. They were good officers, but their good deeds did not speak for them. Their hard work and good work failed to speak for them”.

“They were beaten to death and had their bones broken. Yet we were told they were hard-working and good police personnel, but their work did not speak for them. We are, however, grateful to President Bio and his Government for standing with us in grief. We call for justice for our loved ones,” she concluded.