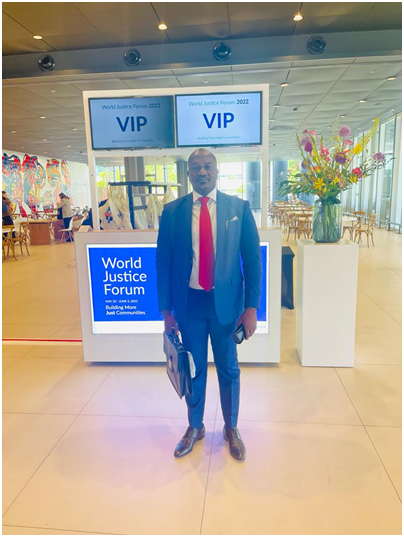 In a keynote address delivered by the learned Honourable Attorney-General and Minister of Justice, Mohamed Lamin Tarawalley Esq at the 2022 World Justice Forum on the theme: “The Global State of Justice and The Rule Of Law”, at the Hague on the 31st May 2022 he called for a collective action to support SDG 16, the creation of a peaceful, prosperous, just and inclusive global community.

According to the AG, the recent WJP Rule of Law Index shows that “globally more countries declined than improved in the overall rule of law performance for the fourth consecutive year”.

WJP Rule of Law Index reported that in a year plagued by the COVID-19 pandemic, 84.7% of the world’s population or approximately 6.5 billion people globally experience a decline in the performance rule of law.

The Attorney General (AG) argued that a decline in rule of law performance puts nations at risk of failing to achieve the 2030 Agenda and, more frustratingly, seeing their hard-won development gains reversed.

He emphasized that establishing justice and strengthening the rule of law is a long-term investment that amasses massive dividends for the global village.

However, the AG noted that the Government of Sierra Leone has made series of strides in this direction, adding that one of the Government’s top priorities at the moment is a national action-oriented approach that seeks to advance the rule of law and access to justice in order to ensure a well prosperous, peaceful, just and inclusive society.

The AG further explained that the Government of Sierra Leone continues to eliminate threats to democratic freedoms and human rights and further stated that the resolve of the Government in addressing all concerns in the Justice Sector is evident in every sphere of Government administration.

“The Government of Sierra Leone has made tremendous strides in addressing various justice demands that touch and concern the socio-economic and political wellbeing of its subjects.”

He highlighted that among these are meaningful improvements in the areas of: free quality education, school feeding programmes; national water resources management mechanisms; reformation of the citizenship law to end discrimination against women who could not pass on citizenship to their children; adopted policies and laws aimed at strengthening gender equity and protection and guarantee women’s empowerment; development of laws eliminating inequality and discrimination; increasing of the maximum penalty for rape and sexual penetration of a child decriminalization of half a century libel law by virtue of the amendment of Public Order Act (POA) 1965 that used to criminalize freedom of expression; the lifting of the ban on pregnant girls attending schools and the abolition of the death penalty and strengthening of the protection of the right to life.

However, conscious of the damaging impact of corruption on justice and rule of law, the Minister of Justice explained that the Government of Sierra Leone has put a robust fight against corruption.

In the fight to eradicate extreme poverty and sustainable socio-economic development, he said, “the Government of Sierra Leone amended the Anti-Corruption Act in 2019 which gives more powers to the ACC it increases the fines, sentences and other powers of the Commission.”

Furthermore, he said the Government took further steps by setting up three independent Commissions of Inquiry (COI) the purpose of this inquiry is to combat corruption, bring accountability in governance and foster economic growth for the people of Sierra Leone.

The AG maintained that the fight against corruption in Sierra Leone has been and, is radically entrenched and successful. He revealed that countries in the sub-region such as Liberia, Ghana, and Nigeria have sent researchers to come and study our anti-corruption strategies for onward implementation in their own countries.

“The indicator lights of these success stories speak for themselves. All thanks to the appointment of a young, robust and competent Anti-Corruption Commission (ACC) Commissioner, and the political and legal space given to him by the Government,” he said.

Prior to the appointment of the current Anti-corruption commissioner, the Minister of Justice explained “Sierra Leone was in the position of 49% in the Millennium Challenge Corporation’s Control of Corruption (MCC) Scorecard, which under his astute leadership and full support of the government, the country has moved to a comfortable and respectable position at 71%, 79%, 81% and an excellent 83% in 2018, 2019, 2020 and 2021 respectively.” Similarly, according to the Afro Barometer survey in 2020, corruption prevalence in Sierra Leone has reduced from 70% in 2015 to 40% in 2020.

He said President Bio-led Government’s strategy in the fight against corruption has helped position the country on a firm and consistent path to sustainably keep corruption under control and set the stage for: accountability, effective service delivery, democratic good governance, and sustainable development.

“This mode of fighting corruption and success stories have made Sierra Leone to be selected for the Multi-Million Dollar US Government’s Compact award,” he underscored also adding that today, Sierra Leone is one of the top ten Performers in the Lower Income countries, which is a sign of commitment in controlling corruption.

The AG reiterated that Corruption indeed has been largely responsible for poverty across the world which in turn is contributing considerably to stagnating justice and the rule of law.

With regards to engagement with the Universal Periodic Process (UPR), the Minister of Justice that the Government of Sierra Leone has demonstrated consistent and effective engagement with the Universal Periodic Review (UPR) process in its determination to make progress on human rights promotion and protection adding that Sierra Leone is honouring its reporting obligations under the relevant human rights conventions.

The AG said that there has been an expansion of legal aid services to indigent and under-served persons through the Legal Aid Board scheme which provided free legal representation, advice, and related services to over 400,000 Sierra Leoneans in 2020, recording a 93% increase from 2018. Special courts to fast-track cases for sexual offences, social security, corruption, and small claims were established.

Sierra Leone is a signatory to: the International Covenant on Civil and Political Rights 1961 (CCPR), the International Covenant on Economic and Social and Cultural Rights 1966 (CESCR), the Convention on the Elimination of All Forms of Discrimination against Women (CEDAW) 1979, the Convention against Torture and Other Cruel and Inhuman or Degrading Treatment or Punishment (CAT) 1984,  the Convention on the Rights of the Child (CRC) 1989, the African Charter on Human and People’s Rights (ACHPR) 1981 and, African Charter on the Rights and Welfare of the Child.

“Most of these treaties have been domesticated in our country,” he said.

The Minister of Justice also explained that in a bid to curb impunity, Sierra Leone, after 11-years of brutal conflict, requested the United Nations to assist in establishing a Special Court for Sierra Leone to try and punish violations of human rights.

In 2002, a bilateral agreement was signed between the Sierra Leone Government and the United Nations to establish a Special Court with a mandate to bring to justice “those who bear the greatest responsibility” for war crimes, crimes against humanity, and other violations of international humanitarian law committed in Sierra Leone since 30th November 1996.

The importance of the RSCSL in ensuring the legacy of the Special Court for SL through carrying out the numerous legal and practical obligations that did not end with the conclusion of trial and appeal hearings cannot be overstated. One indictment remains outstanding- that of a former rebel leader Johnny Paul Koroma. The RSCSL continues to be an important legacy tool of deterrence in Sierra Leone where it has the confidence of the people of Sierra Leone. Respect for the rule of law, legislative reforms, capacity building, and the court and its predecessor’s impact on legal and judicial proceedings in Sierra Leone are all part of its important legacy

The AG reiterated that to gain global justice and strengthen the rule of law, “a great place to start is in our respective national settings.” He said the road towards a world of justice, prosperity, and inclusiveness for all is not without assailants. “Oftentimes, the surge in the demand for justice has been endless and seemingly impossible to redress. Therefore, we must draw the strings of our collective efforts together in bringing about a peaceful, just, and prosperous global society.”

He calls for all hands on deck as “justice exists for all but realizing it goes with huge sacrifices.”

“As an optimist, I have all rays of hope that we will someday get there. So, let’s continue to act and to fight,” the AG implored.