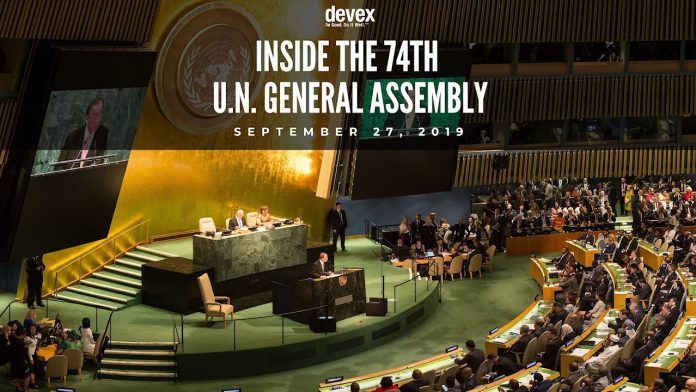 As it comes to an end, the U.N. 74th General Assembly Summit has been a very interesting one indeed. While there was some progress at this year’s UNGA, action on financing, climate change, and universal health coverage still fell short of what’s needed to place the Sustainable Development Goals within reach by 2030.

The week paired multiple urgent priorities with largely incremental action, and the result was a clearer picture of challenges, rather than solutions.

Speeches and more than 300 side events ushered in a groundswell of momentum to speed up responses to tackling climate change, UHC, the SDGs, and development financing. But the energy was not necessarily synonymous with optimism. Government, civil society observers, and multilateral leadership alike had a common refrain throughout the week: We’re falling short on the SDGs.

At the same time, some development leaders expressed hope about new ways of approaching development work, from using digital health tools to mainstreaming climate change. Partnerships that may have seemed unlikely even a few years ago are now becoming the norm. As Greta Thunberg said during her General Assembly address to world leaders, “We’ll be watching you”.

The High-level Dialogue on Financing Development brought about a familiar refrain about the lack of progress and the need to accelerate efforts to mobilize capital — from domestic resources to private investment.

“Financing is the test of our seriousness. Without resources we will simply not deliver for people or planet,” said U.N. Secretary-General António Guterres.

Three important achievements were made at this year’s UN summits:

“One of the challenges of financing for development and a lot of the work is that it hasn’t remained at the level of heads of state and major decision-makers,” said Eric LeCompte, Executive Director of the financial-reform focused alliance Jubilee USA.

The “value of INFFs is in bringing together the different elements of the Addis Agenda and the country level,” said Neven Mimica, European Development Commissioner. UNDP Administrator Achim Steiner noted that such frameworks will help move financing away from abstract notions and instead focus on assessing what is preventing money from meeting development needs.