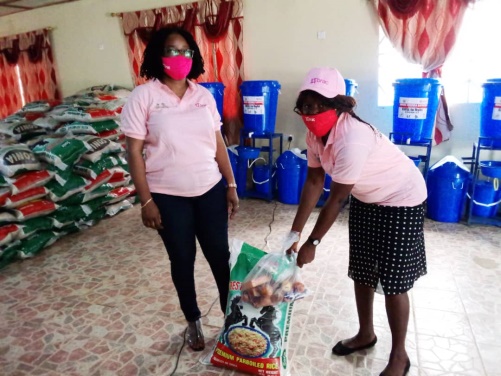 Stakeholders from the Ministry of Social Welfare Gender and Children’s Affairs, Ministry of Education and the District Health Management Team in Bo have graced the official launch of BRAC Sierra Leone’s Food Basket and Hygiene Kits for 300 Adolescent Girls in 10 communities in Bo District.

Programme Manager, Youth Empowerment and Education for BRAC- Sierra Leone, Dr. Regena Kain underscored that the Empowerment and Livelihood for Adolescent Girls Project undertakes series of activities including life skills, mentorship for girls among others.

She revealed that during their usual engagement with the 300 Adolescent Girls under their mentorship and supervision during the Inter District Lockdowns, concerns of hunger among the girls were raised. This she went on, triggered their timely intervention to donate 300 bags of 50 kilo rice and food condiments including sanitary pads, deodorants and kegs of soap each to be shared among the beneficiaries in 10 communities in Bo District.

Dr. Regena Kain averred that the rationale behind the gesture is to cushion the ailing concerns about unavailability of food for their targeted beneficiaries.

She also used the opportunity to donate ten COVID 19 Wash hand Stations which she said is to be stationed in 10 of their operational areas within the program specifications.

Officially launching the initiative, Gender Officer, Ministry of Social Welfare Gender and Children’s Affairs, Madam Martha Idriss Feika on behalf of her Ministry lauded BRAC Sierra Leone for the huge donation especially at such a trying moment when COVID 19 has disrupted all facets of life.

She lamented on some challenges faced by women and girls during the lockdown periods which predicated the move by Government to provide food aid to some vulnerable people in society.

Madam Martha Idriss Feika appreciated the indelible contributions of BRAC Sierra Leone towards cushioning the myriad of economic quagmire faced by the rural poor and women across the country.

Parent of one of the beneficiaries who also doubles as the Town Chief Nduvibu Section, Bo Kakua Chiefdom, Chief Albert Musa Charles narrated the positive impacts of the project in his community adding that their daughters are performing extremely well attributing their successes to the activities of the Empowerment and Livelihood for Adolescent project and constant mentorship opportunities.

He, on behalf of all parents present showered profuse thanks on BRAC Sierra Leone for considering them at such a crucial time.

One of the beneficiaries, Hawanatu Kemoh, a JSS 1 pupil of the St. Theresa Junior Secondary School in Bo aged, 12, commended BRAC Sierra Leone for the intellectual capabilities they have acquired over the past months while being members of the BRAC Empowerment and Livelihood Project in Bo.

She narrated the ordeals of food challenges and access to free sanitary pads which she said is one of the major reasons why most of their colleagues have fallen prey to sex predators.

Similar sentiment was shared by Mariama Bona, Mentor and beneficiary of the Food Basket and Hygiene Kits donation.

BRAC is a Non-Governmental Organization that was founded 49 years ago in Bangladesh and started operations in Sierra Leone in 2008. They have over the past years implemented a lot of programmes in many sectors ranging from Health, Emergency Response preparedness, youth empowerment and gender, agricultural projects and Microfinance with them being the largest micro finance organization in Sierra Leone with over 69,000 beneficiaries. 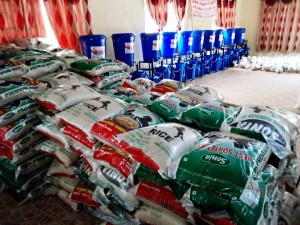 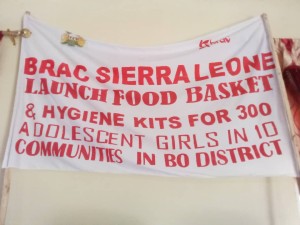