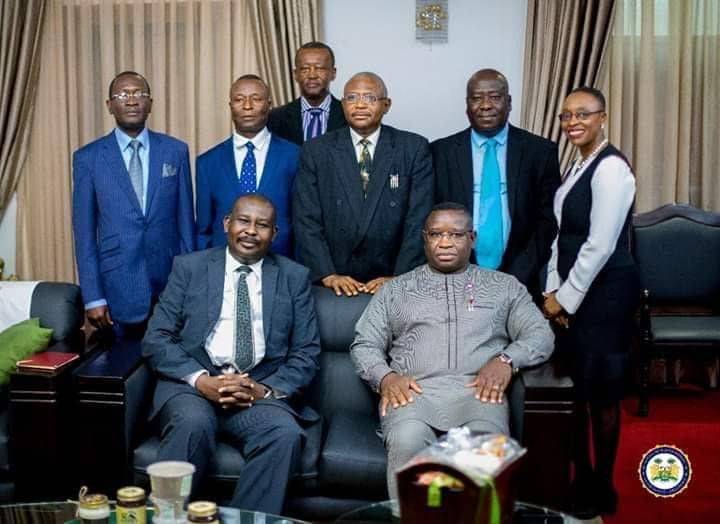 At State House four newly appointed judges of the Supreme Court of Sierra Leone subscribed to the Oath of Office before His Excellency President Julius Maada Bio in accordance with the 1991 Constitution of Sierra Leone.

In his statement, Justice Halloway, who spoke on behalf of other Judges, said they were thankful to the President for according them the privilege to serve in the highest Court of the land. He said they were not only thrilled to have fulfilled their academic and professional dreams but were now, more than ever before, in the position to make ultimate contributions to the development of the nation.

“We want to assure you, His Excellency that your magnanimity is not lost upon. We will treat our appointment, as Judges of the Supreme Court, with the greatest importance it deserves. We are truly grateful and wish to extend our deepest appreciation in this regard.

“I want to assure you, His Excellency that we are fully aware that when we as Judges of the Supreme Court put on our judicial robes it serves as a reminder of what is expected of us: impartiality, boldness and courage. We promise to uphold the law and dispense justice without fear or favor as we ensure Unity, Freedom and Justice for all,” he said.

In his response, President Bio congratulated the new Judges, saying that they had been meticulously chosen and that society was looking up to them because so much was expected of them in the pursuit of making Sierra Leone a better place for everyone.

“We know the enormity of the task ahead and when I made the pledge that Sierra Leone will be a better place, I did so on behalf of many well-meaning Sierra Leoneans like you. So, with your appointment, I expect that you will join us, while keeping your independence, in moving in the New Direction to make Sierra Leone an enviable place,” he said.