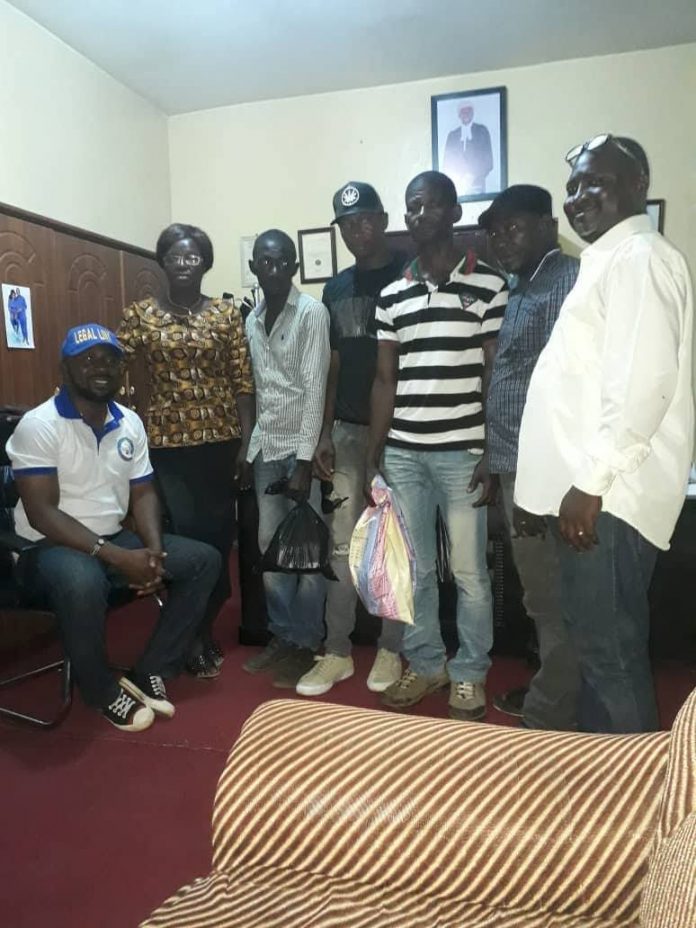 Three former workers have been helped by the Christian Lawyers Centre referred to as LEGAL LINK) to recover their end of service benefits from their employer in the tune of 70 million Leones.

It originated in 2018 when the cement factory, LEOCEM, laid off the three workers on the grounds that they had stolen properties belonging to the company while in employment.

The three workers were handed over to the Police and were later charged to court with the offences of Larceny and Conspiracy respectively.

Upon their appearance in the Magistrate Court No 2 at Ross Road they were denied bail and had to spend some days at the Pademba Road maximum prison.

Upon receipt of this matter and realizing that the allegations against the trio were falsely motivated, LEGAL LINK together with certain lawyers intervened in the matter.

After a few appearances and the inability of the prosecution to vitiate the legal burden by reason of their failure to attain the requisite standard of proof, the presiding Magistrate in his ruling dated 16th day of January 2019, stated that: ” there is absolutely no evidence pointing to the offence of Conspiracy and also no evidence linking accused persons to larceny”. The accused persons were subsequently discharged.

Motivated by this successful judgment, LEGAL LINK then proceeded to institute legal actions against Manpower Employment Agency, the sub-contracted agency of LEOCEM; which recruits casual workers on its behalf for the full payment of backlog salaries, damages for unlawful dismissal and the end of service benefits of the trio.

A formal complaint was lodged to the Ministry of Labour by LEGAL LINK on behalf of the affected former workers as a first step before filing of the writ of summons in the High Court of Sierra Leone.
The certified true copy of the order of the presiding Magistrate that discharged the trio was also sent to them for their comprehension of the malicious prosecutorial action that was brought against the erstwhile workers by the company in a bid to circumvent their financial obligations owed to them.

A letter of invitation was then sent by the Ministry of Labour to all the parties and after two successive meetings, and having fully assessed the strength and determination of LEGAL LINK to pursue the matter to its logical conclusion, the Company through its sub-contracted representative, Manpower Employment Agency Limited, made an undertaking to pay the full backlog salaries, end of service benefits and other emoluments to the trio without any reservations.

On the 13th of March 2019 at the office of LEGAL LINK, the three ex – workers received a whooping sum of 70 million Leones as backlog salaries and end of service benefit package for the number of years they had worked for the LEOCEM Company.

It was indeed a moment of tears of joy as the three casual workers could not believe what was happening before them when the money was being handed over to them by the Chief Executive Officer of LEGAL LINK.

One of them even later remarked that he never thought this was going to happen in his lifetime. “It was like a dream,” he stated.
Besides the monetary payment that was made, the Managing Director of Manpower Employment Agency apologized to the ex-workers on behalf of LEOCEM for the undue hardship and pains caused on them and asked for reconciliation and their forgiveness.

The CEO of LEGAL LINK Rashid Dumbuya Esq, on behalf of the three ex-workers thanked the representative from LEOCEM in fulfilling their undertaking but admonished them to respect the human rights of their employees going forward.

Rashid Dumbuya Esq used the occasion to also call on all companies and employers of labour in Sierra Leone to understand that the UN has endorsed a document known as the UN Guiding Principles on Business and Human Rights.

This document according to him puts responsibilities on Companies, business corporations and multinational institutions to respect the rights of their workers, the rights of host communities where they operate and the health and safety of the environment.

He advised that LEOCEM AND ALL BUSINESS ENTERPRISES in Sierra Leone should endeavor to take a cursory look at this document and put modalities in place that will help improve on their human rights credentials and business reputation.

According to him, a business that respects the rights of its workers would enjoy good will, positive business reputation and sustainability than the one that does not.

The CEO also thanked the Ministry of Labour for their commitment in fighting for Labourers rights in Sierra Leone and for the smooth working relationship that have existed between the Ministry and LEGAL LINK.

In future, this relationship will be formalized into an MOU for better legal representation and cooperation between the Ministry of Labour and LEGAL LINK regarding labourers rights in the country , the CEO remarked.

He admonished the ex-wife to put the monies into wise investments that with benefit them and their families in the long run.