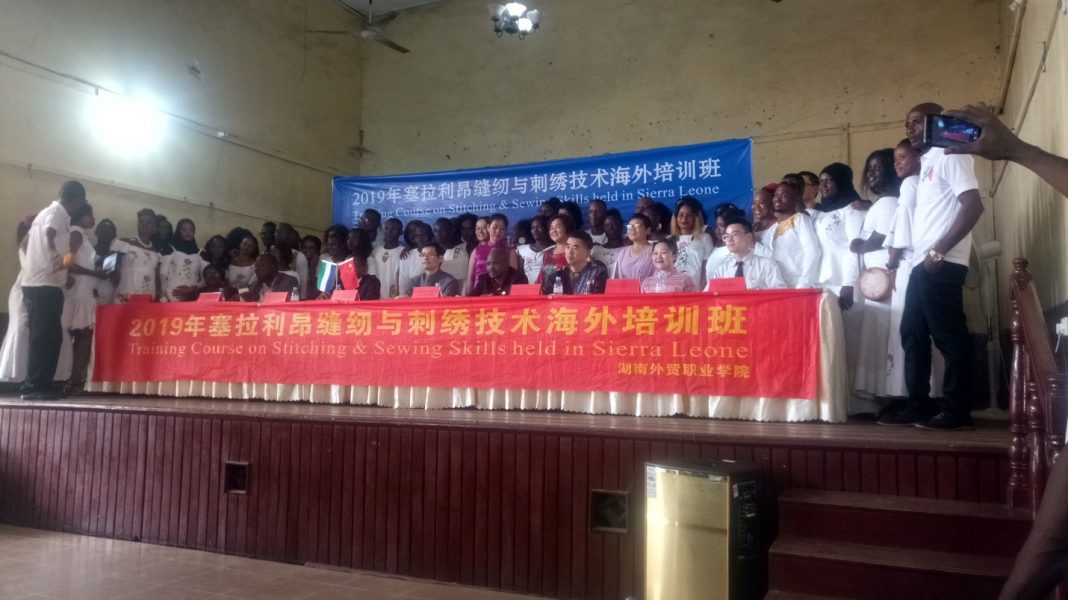 On Monday 20th January 2020, 45 trainees graduated from the Young Women Christian Association (YWCA) Vocational Institute after benefitting from a three weeks skills training  programme that was supported  by the Chinese Government through its Embassy in Sierra Leone .The graduation ceremony was held at the YWCA Old Hall at Brookfields in Freetown.

It should be recalled that as part of the New Direction Government’s strategic agenda to eradicate joblessness and to empower youths, the Ministry of Labour and Social Security in collaboration with the Chinese Embassy supported the skills training programme and also graced the closing and graduation ceremony for the young Sierra Leoneans who benefited from a training programme bordering on stitching and sewing skills.

The Principal of YWCA, Mrs Grace Fullah, applauded and extended gratitude to the Chinese Government for what she termed as their tremendous support not only to the institution but for also enhancing the development of young people in the country. She assured the Chinese Embassy that as an institution they will continue to do their utmost best to further provide future training programmes maintaining how the institute has capacitated many young people over the years.

“We will diligently do the right things that are expected of us,” she said with optimism..

Deputy Minister of Tertiary and Higher Education, Dr. Turad Senesie, in his statement pointed out that as a Ministry they are in a position to collaborate with any foreign organization that is poised to empower the youths of Sierra Leone.

“Government has spent a lot of resources on boosting academic institutions and now we see it as a point of duty to concentrate on enhancing training institutions and empowering youths, giving them working tools all in a bid to support President Julius Maada Bio’s agenda  that is geared towards human capital development,” he intimated.

He disclosed that there are various mapped out programmes that will be rolled out in the direction of boosting skills training for young people. He expressed gratitude to the President of the Republic Sierra Leone for upholding the bi-lateral relationship between the two countries which, he said, has spanned over nine decades.

He praised Sierra Leoneans for being very talented in inventing things pinpointing that they will continue to support innovation and entrepreneurship.

Lansana Mohamed Dumbuya, Deputy Minister of Labour and Social Security informed that youth empowerment is key in the Government’s development plan adding how they are very grateful for the timely intervention of the Chinese Ambassador further acknowledging the tremendous work and efforts that the Chinese have made towards youth empowerment and the overall development of the nation.

The climax of the occasion was issuance out of certificates to the deserving grandaunts as well as sewing machines as start-up kits.