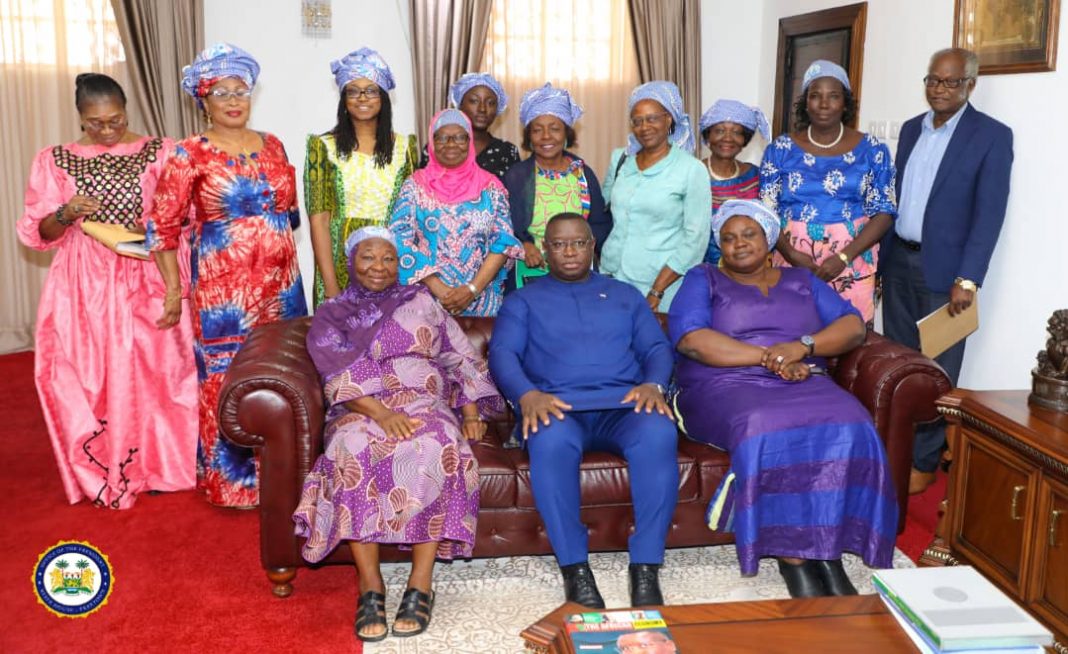 Sierra Leone’s foremost Feminine advocacy organization, the 50/50 Group on Wednesday 8 January 2020 paid a courtesy call on His Excellency President Dr Julius Maada Bio at State House to laud his position on women and girls’ empowerment and his policies to protect them.

The non-partisan organisation, advocating and campaigning for increased political participation and equal representation of women in decision-making processes and initiatives at all levels in Sierra Leone, also called on the President to get more women to participate in governance.

Founder and Global President of the Group, Dr. Nemata Majeks-Walker, said that they were appreciative of President Bio, especially given his passion for women in the country, adding that they had also done some good work by training and empowering women in readiness for national responsibilities. She expressed hope that the Government would continue to bring more women in governance.

Outgone President of the Group, Dr Fatou Taqi, said they were grateful that State House had made time to engage them, adding that they were aware of the work of the President in terms of national inclusion. The women’s leader also said they were aware that the Government is getting more women to participate, reviewing laws in order to protect women and girls.

Dr Taqi professed their support and singled out the efforts of the First Lady with the “Hands Off Our Girls” initiative, which has as a common goal to ensure that rape, teenage pregnancy and all forms of abuse against women and girls are completely eliminated.

“We acknowledge that women are in the majority in the country and we see the role women play in various aspects in the country. We are aware of the appointments you have made and we call for more of such. We are partners in development and we will like to work with your Government to see the Sierra Leone that we all envisage,” she said.

President Bio remarked that he was pleased to meet the women’s group to continue the ongoing dialogue. He said that the fundamental issue he had started to address was to provide equal opportunities for girls in schools, saying that when girls are educated they would be able to take up leadership positions in the country.

He said that with the free quality education and the introduction of the STEM programme, which provided access to university education for women, there would be a critical mass of informed and educated women. He mentioned that the Government was committed to the 30% quota for women’s representation and added that they would look at the proposals in the Constitutional Review Process.

“We have shown commitment in terms of the many things we are doing for the girl child. Teenage pregnancy, early marriage and rape are critical issues that we all must pay attention to. We have to pay attention to the next generation of women and we are making a national appeal to save their lives and provide a better future for them. I want us to work together to change the story of our women and make it sustainable,” he said.