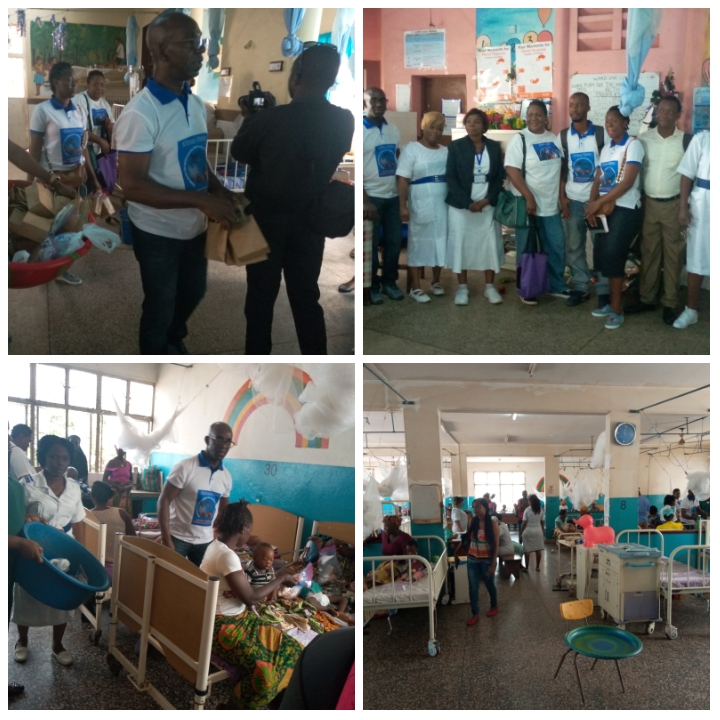 On Monday 6th January 2020, African Vision, a charity organisation, based in the USA, offered an assorted package of confectionaries to children at the Ola During Hospital commonly known as ‘Cottage Hospital’, and at Ward 1 in the Connaught Hospital.

Speaking to the mothers of the sick kids, the President of African Vision, Madam Warrah George and her husband, who is the Vice President, Thomas George, told them that they are a Christ-based charitable organisation, with a vision to care for the needy, less privileged and vulnerable children and women. Being Sierra Leoneans, they thought it fit to start at home. Madam Warrah disclosed to the expectant parents that she was a nurse in her early years in Sierra Leone and has worked with children and the sick. She further stated that God has given her the vision to serve humanity and provide hope for the hopeless. She encouraged them to put their trust in God, as he is the only one that can make them well and change any situation.

She praised the medical staff for their devotion to duty, admonishing them that their reward is from God, as no amount of money can adequately make up for the time and energy they give to the sick. She told the parents looking after their kids at the Ola During Step Down Unit as well as its Observation Unit that they should not lose hope and that God cares for them and their kids and will see to it that they get better.

Matron Francess Pearce of the Ola During Hospital told this medium that the Step Down Unit is where kids that have been taken from the Intensive Care Unit in the facility are stabilized and those that are brought in to the hospital, in cases of emergency, are observed for 24 hours at the Observation Unit. At the Step Down Unit some 40 kids are admitted.

Distribution of packets of biscuits, cookies and other confectionaries were given to the parents, plus some cash in envelopes to enable them purchase some toiletries for the kids. Some of the parents expressed appreciation to the team of African Vision for their kind gesture and prayed for Gods continuous blessings on their lives and endeavours.

This event climaxed the series of donations to vulnerable and less privileged people across the city by the organisation. They started on the 23rd December at the female Correctional Centre at New England, where they offered food items and drinks to some 66 inmates and to other 99 male inmates located at the Special Court at New England, where they are being rehabilitated. On 30th December 2019, the team visited less privileged, homeless and physically challenged people sleeping roughly on the streets, between the Law Courts Building and East End Police Station in Freetown. They too were given food and drinks and words of encouragement and prayers offered for them.