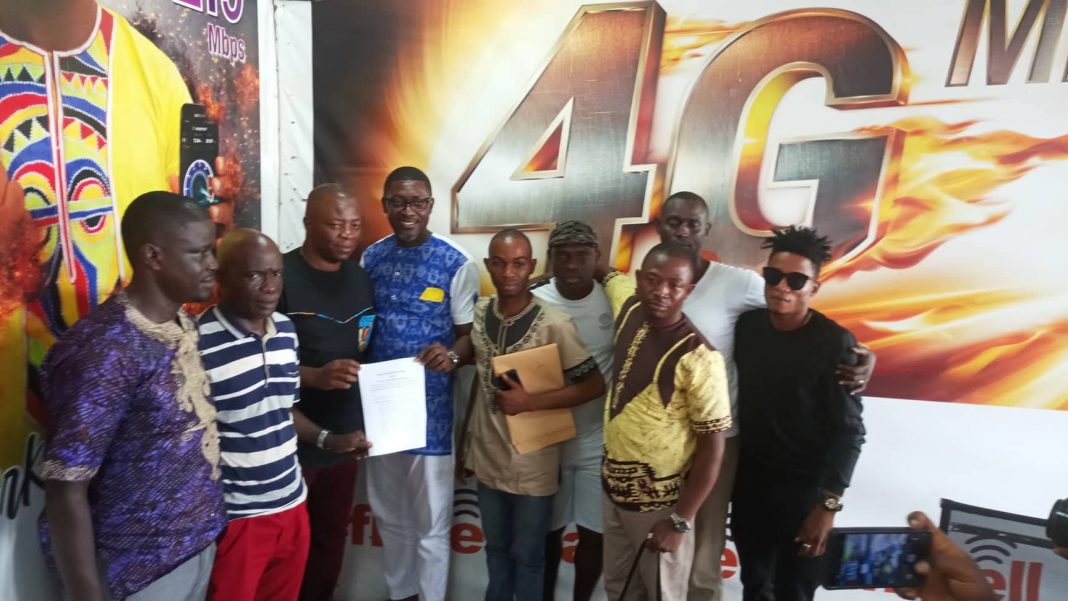 In continuation of its sponsorship of Sierra Leone’s 2019 Premier League, the country’s leading Telecommunications Company, Africell, on Friday 22nd March 2019, officially signed an MOU with the Diamond Stars Football Club to carry its brand on its jerseys. This event marks the 5th signing with clubs in the on-going 2019 Premier League.
Present at the ceremony were the Team Manager of the Diamond Stars FC, Adam Tommy, Vice Chairman, Mark Yambasu, Secretary General of the FC Sahr Ezra Kellie, Africell’s Nancy L. Joseph, Manager of AfriRadio, John Konte and members of the press.
In his opening remarks, the Chairman of the meeting, Abdul Karim of AfriRadio, said that Africell’s support to the development of young people in the country is unbelievable. It has been engaged in the promotion of young talents in the country and the meeting is a testimony of this commitment on the part of the company to continue to promote youths. He stressed that it is the first time in the history of telecommunication that a company has embarked on technical and financial support to clubs in the premier league, adding that this is due to the belief that the company has in the youths of the country. He also disclosed that Africell, in collaboration with the Sierra Leone Premier League Board, have ensured the revamping of the league, which is on-going in the country.
Speaking on behalf of Africell, the manager of AfriRadio, John Konte, told the audience that Africell is here to stay. The company, he maintained, is committed to promote and showcase the talents of youths in the country, adding that Africell has been sponsoring various youths in various spheres. Starting with Music, Africell has signed several artists as Brand Ambassadors and also artists in other sectors in the entertainment industry.
After the Ebola, he disclosed, the company noticed that the entertainment industry, especially music had dropped and cognizant of the fact that Sierra Leoneans love music, they came on board to revamp the music industry and today Sierra Leonean music is heard everywhere in the country and beyond. It is the avowed aim of the company to come close to anything that Sierra Leoneans love that has prompted their involvement in the on-going premier league. It goes without saying that the population love music and football; with the latter being almost like a religion. Sierra Leoneans, he maintained, follow football with their hearts and resources and in order to bring them closer, Africell has embraced what they love; football.
John Konte further stated that 4 Premier League football teams have been sponsored and MOUs signed, namely: East End Lion FC, Bo Rangers FC, Old Edwardians FC and Mighty Black Pool FC.
He recalled February during a similar signing ceremony pointing out that this is not the end as Africell will embrace more Premier League Clubs and this event is a testimony of this commitment. John Konte then announced the sponsorship of the Diamond Stars FC of Kono, which will entail an undisclosed amount of cash plus 2 sets of jerseys to the team. He recognised that the team wears its traditional yellow and black in its home encounters, Green and white on its away matches.
The jerseys whilst having the club’s colours will have the names and numbers of the players on it and the club’s logo plus an Africell logo. This will further bring the supporters and the people of Kono closer, especially as the company has a huge subscriber base in the district. This move is to keep Africell in the centre of what the people love. The company is not interested in what the club makes financially, only that it should fly its logo in every encounter to buttress the point that the company is at the centre of what the people love. John Konte further stated that this signing is not the end, more clubs will be sponsored, as it is the avowed aim of the company to promote football and empower the youths.
Adam Tommy, Team Manager of Diamond Stars FC and former player in the national Team (the finest right-back that the Leone Stars has ever produced), expressed appreciation to the company for this kind gesture, adding that Africell occupies the physical space and has done a lot to develop the game and bring people together. On their part they are ready to do all that it takes to promote the game and the company. He admonished Africell to engage other clubs in the Premier League. He also sent a message to other teams that when sponsored, they should endeavor to fly the company’s logo high and maintain the ideals of fair play and good sportsmanship. The jerseys, he went on, will be replicated with the company’s logo during the course of the league. He praised Africell for coming on board to help the government in the development of football in the country, as it not only provides entertainment for the public, but creates job opportunities for the players.
Vice Chairman of the team, Mark Yambasu and Secretary General Sahr Ezra Kellie, shared similar sentiments, adding that Africell made no mistake in choosing them, especially as the subscriber base in Kono is huge and with the logo on their jerseys, supporters of the club will feel part of the company.
The ceremony was climaxed by the signing of the MOU between the club and Africell officials. The vote of thanks was given by Nancy L Joseph of Africell.