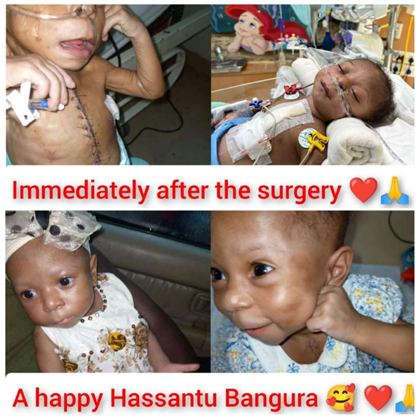 Hassanatu Bangura was born with bluish discoloration of mucous membranes due to lack of oxygen in the blood caused by a blood clot in the arteries of the lungs, heart defects that are present at birth, and swelling around the vocal cords.

After the Sick Pikin Project raised and spent over Le 370 million Leones ($28,000USD) for her surgery in New Delhi, India, she successfully went through it.

Hassanatu had a chest x-ray during that time and the results revealed that she had Truncus Arteriosus + Ventricular Septal Defect. The hospital report later recommended that she be sent out of Sierra Leone for surgery.

After spending days at the Ola During Children Hospital and her health condition was deteriorating day by day, The Sick Pikin Project International stepped in, as usual, to help raise funds for her as her case could not be treated here in Sierra Leone.

Having raised funds for Hassanatu, with the help of the Ministry of Health and Sanitation,  UK and USA teams, volunteers and the Charles family, she was taken out of the country through Turkey and then to India with oxygen throughout her journey to India where she underwent a very critical life-saving surgery successfully.

On June 1, 2022, in accordance with the doctors’ approval, Hassanatu Bangura was discharged from the hospital in India and has, in good health, arrived in Sierra Leone together with her mother who was beside her during the whole of the surgery process.

This medium was made to understand that it was not an easy journey but as Nelson Mandela would say, “Let us reach out to the children. Let us do whatever we can to support their fight to rise above their pain and suffering.”

The Sick Pikin Project International is extending thanks to  the Ministry of Health and Sanitation, their UK and USA team, amazing volunteers, and the Charles family for their enormous support in ensuring that baby Hassanatu underwent her surgery successfully.

According to the Sick Pikin Project International we are all heroes and heroines and will forever be further appealing for a continuation to make an impact on the lives of children maintaining that they will become what we do to them.

As Nelson Mandela once said,  “History will judge us by the difference we make in the everyday lives of children.”