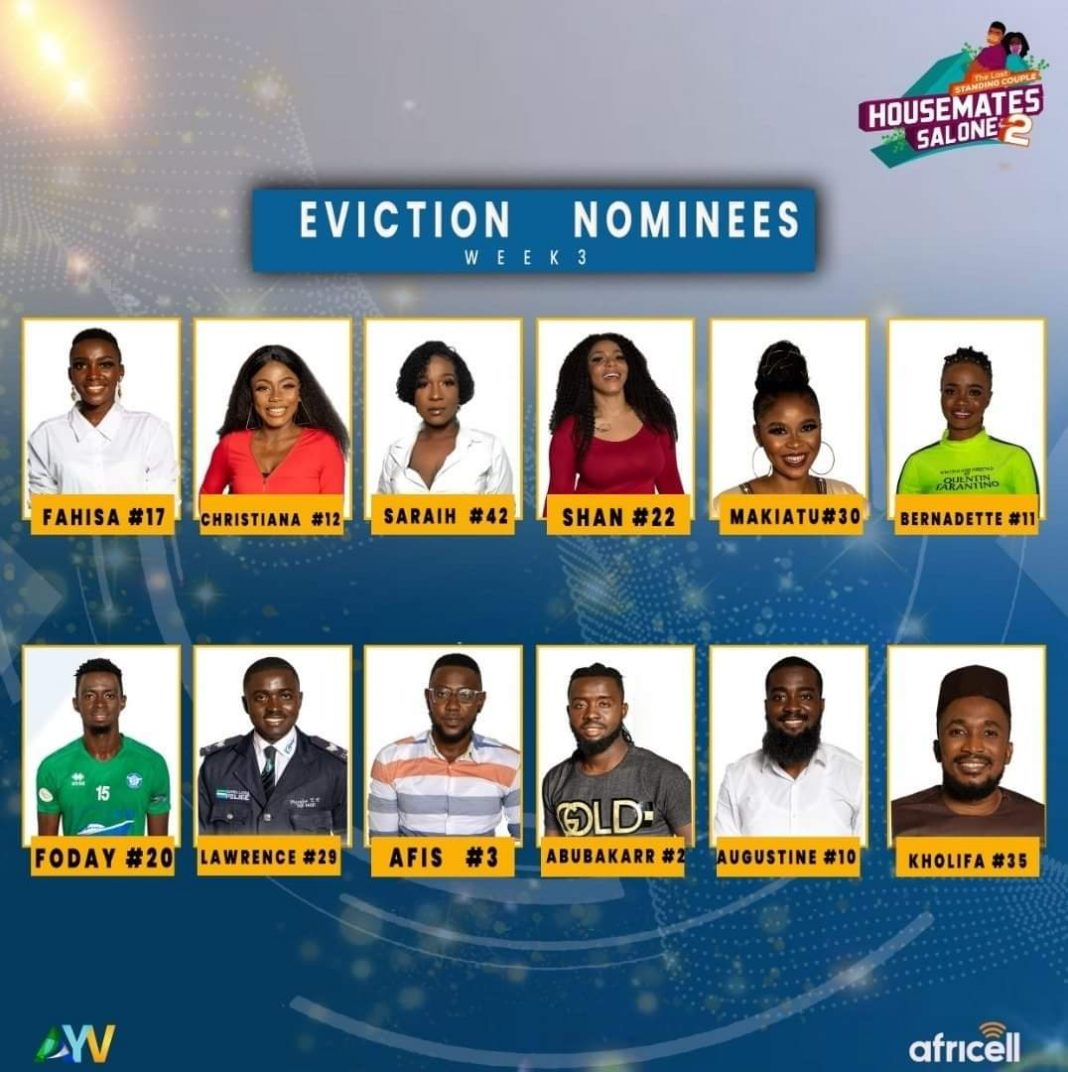 As Housemates Salone has now captured the minds of many in and out of Sierra Leone, as recent surveys in different parts of the country have clearly manifested, it is mooted that six (6) couples are up for possible eviction this week. However, what is certain for now is that people are really enjoying the episodes as they keep on unfolding and as a matter of fact even learning from them.

Indeed, what is uppermost in the minds of the various Housemates is bagging the staggering prize of Two Hundred and Fifty Million Leones (Le250M) plus undertaking a round trip to Dubai. Interestingly, apart from bagging the Star Prize, all participants are now entitled to their daily allowances of Le100, 000 each whilst they still remain in the House and accumulatively given to them whenever eviction takes place.

As the show progresses, based on the percentages of votes scored by each and every Housemate will surely determine whether he or she will be either evicted from the House or make it to the grand finale.

The organizers of the Reality TV Show, AYV and Africell, have ensured that all the necessary preparations have been put in place to bring exciting episodes from this popular entertainment show.

As they are now in the House, the Housemates are  appearing sexy and displaying  some form of nudity which must not come as any big surprise as the show is tailored in that way.

Again, seeing them talking strongly is simply because they are supposed to be intermittently using strong language and be humorous.

Manifesting and portraying these traits well are what is really making the Reality TV Show very interesting to watch and in one way or the other providing comic relief for viewers and serving as a therapy to reduce stress.

Put contextually, Housemates Salone provides the unique opportunity for the participants to perform various assignments, learn new skills that would definitely mould their characters to an extent that after the show they would be transformed personalities set to give back to society.

As it now stands, the Housemates are presently benefitting from widespread exposure as the Show is watched near and far. Talents are spotted and vistas of opportunities await some of the Housemates who could be contracted to become, advertisers, Brand Ambassadors, movie artists, models etc.

They are also gaining a lot from motivational lectures, socializing, learning how to play different games, how to speak fluently etc.

It is the expectation that the ultimate winner will embark on the implementation of a sound project, in the post-Housemates period, that will positively impact the lives of young people in the country.

Financially empowering these Housemates provides an important channel to make the future prospective for them. Each day spent in the House earns a Housemate Le100, 000. The winner will have to bag the covetous prize of Le250, 000,000.

As the show is now in progress it is streamed live online at Africa Young Voices Media Empire Facebook page, AYV entertainment TV, Africell Sierra Leone Facebook page and on website at www.ayvnews.com.

Housemates Salone Season 2, from all indications, is really exuding fun, entertainment as well as educative episodes.