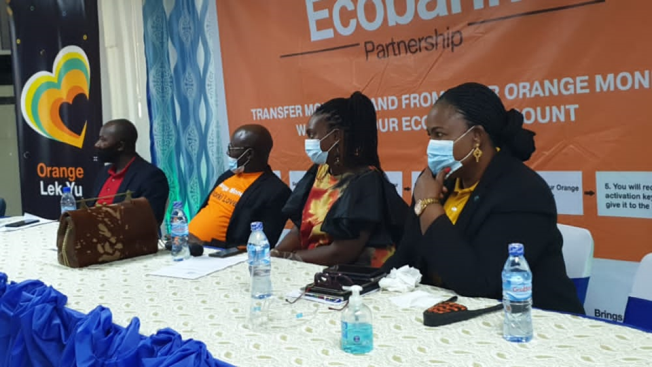 The Orange Money Bank to Wallet service and Wallet to Bank is a simple and easy means for valid customers of Ecobank and Orange Money to send and receive money at ease even within their respective comfort zones in their homes, offices or in shopping malls.

The Chief Executive Officer of the Orange Money Sierra Leone, David Mansaray, narrated testimonies of how Orange Money has aided people in their daily dealings and make work easier and shorter for members of the working and business classes.

He stated that one of the key roles of Orange Money is bridging the gap in order to achieve financial inclusion saying such forms part of President Bio’s agenda messages for the nation. He laid emphasis on the service saying it is not only good for Orange Money customers but also for those at Ecobank as they have a strong working relationship ending up by thanking the Orange Money team and the Ecobank team for their relentless support.

Aina Moore, Managing Director of Ecobank Sierra Leone, gave a synopsis of the bank stating how they have been doing well since the inception of Airtel money before it was changed to Orange.

She disclosed that the two institutions have been working together and still maintain a good relationship adding how banking does not mean where one goes but how one does it as technology has made it simple, easier for them and their customers to make mobile money services become accessible.

She went further to explain how collaboration is important in operationalizing the service. According to her their bank cannot reach to the farthest parts of the country but with the help of Orange Money outlets in various villages they are of the strong conviction that the bank has reached them using the E-Banking system and reduce the cost of opening banks in the interior.  She expressed appreciation and thanked Orange Money for partnering with them and assured their customers that there are more services that their bank can offer that does not exist in other banks.

This service works only for Orange Money and Ecobank customers, which means that one must have an Orange Money account as well as an Ecobank account to be a valid user of the service.

An individual can register free of charge and understand that the service works for owners of smart phones as well as other less sophisticated phones. The minimum for sending or receiving money is ten thousand Leones and the maximum is fifteen million per day. The minimum cost is five hundred Leones and the maximum is twenty-seven thousand Leones which is much reasonable compared to paying transport fares to the interior which costs more.

To use the service an individual should not forget to dial #144# and follow the instructions which will lead one to choose the bank of his or her choice and enter a password and the amount a person wants to send or withdraw. With such simple steps transaction is done easily. 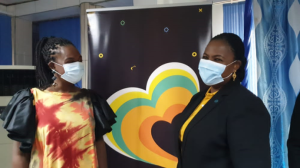 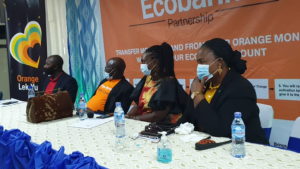