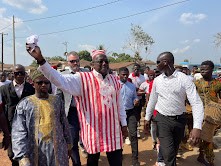 During an auspicious and carnival-like ceremony held on Saturday 21st January, 2023 at the All People’s Congress Regional Office in Pujehun District, Southern Province of Sierra Leone, former Ambassador to the Republic of South Korea, Omrie Golley, officially declared his intention to lead the APC party to the 2023 elections.

In his address to residents of the district, Ambassador Omrie Golley stated how he has been working towards building a brighter future for Sierra Leone during his entire adult life maintaining that two decades ago, when the country was going through it darkest times, he placed himself at great personal risks to help restore peace in the country.

He intimated that he then served as the country’s Ambassador to South Korea, working to strengthen the fragile peace the country had won, securing investments and resources for the nation’s development and building Sierra Leone’s reputation across the world, adding that he then established agricultural projects across the country to support and educate the people in modern farming techniques with the aim of achieving food security.

“Now I stand before you to announce that the time has come for me to take a more central role in building a better future for Sierra Leone. This is an important moment for our country, for all of us. In days and years to come, I believe our fellow citizens and their children, even their grandchildren, will look back on this hour, this day, and recognise it as the point when Sierra Leone finally demanded the future it deserved,” he informed the gathering.

He maintained that the task facing this generation of leaders is not to make promises that have been heard before and it is not to promise the earth and then forget about those promises once safely in office, adding that the challenge is not to allow a small minority to grow wealthy by the efforts of millions of hard-working honest people underscoring that the task is to turn a new page in the nation’s history.

He elaborated that it is to forge a new Sierra Leone that rejects the cynicism and broken promises of the past, that restores citizens’ pride and dignity and that draws a line under the misery, division and poverty of the past, and shapes a new future for ourselves and children.

“A new energy, a new hope, a new optimism that will transform our country that will make the kind of change we want to see a reality – inevitability. We cannot say to our people that business as usual is good enough. People want change, and they need someone they can trust to deliver a positive transformation of Sierra Leone,” he disclosed.

The Presidential Aspirant noted that he believes the time has come for him to step up and he believes that he can bring the APC party and the people of Sierra Leone together and lead the country to meet this challenge of which he therefore announced that he is standing to be the flagbearer for the APC, and the next President of Sierra Leone.

He informed the gathering that he has been at one with the APC since the early 1990s and he has supported the party in good times and in difficult times, furthering that he will continue to support the values of the party and have great respect for his brothers and sisters who have already declared their candidacy for flagbearer. But he stated that he believes the time has come for fundamental change and he wants to play his part to deliver that change.

“You know that I am an experienced peacemaker and unifier. I will end the division in our party and bring people together. I will unite North and South, Muslim and Christian. I will bring all our tribes and factions together. There is a reason that my campaign message is ‘Forward Together,”

He maintained that because unity is the most important quality required of the flagbearer: only if the APC is united will they defeat the current President, revealing that he has unique experience in promoting the development of our nation, both as Ambassador and through his agri-education projects.

Omrie Golley disclosed that as President he will build on the experience to transform agriculture in Sierra Leone, making the most of the country’s God-given advantages to achieve food security and end the widespread hunger of the masses.

He added that he will tackle endemic corruption in society, ensure that the mining of the country’s natural resources benefits all and not just a small few,  will build a modern healthcare system which will be there to take care of us all, adding that he will ensure all Sierra Leonean children have access to an education that gives them the best possible start in life.

“Our problems are too large’, they say; ‘too long-term, too ingrained, too expensive to fix,” I am not one of those people. For I have faith, faith in my fellow citizens, Faith in Sierra Leone,” he maintained.

He disclosed that instead of just preaching from afar, he has made personal sacrifices, used his own resources, his own skills, his own two hands to start building that future, with a vision to lead the nation: unite the APC party and the people, and heal the divisions of the past.

“I am here to build a Sierra Leone where no-one lives in hunger and suffer oppression. And I stand here to ask for your support. Together, we can deliver that brighter future for Sierra Leone,” he concluded.

Other dignitaries present at the ceremony including a Senior APC Party Stakeholder, Ms Cecilia Ngobeh, the APC Youth Representative, Issa Soko Tarawally, the APC Veteran Supporter, Hon. Amara Adikali Kamara also made statements of which they all threw their support behind Ambassador Golley for the 2023 APC Flagbearer.