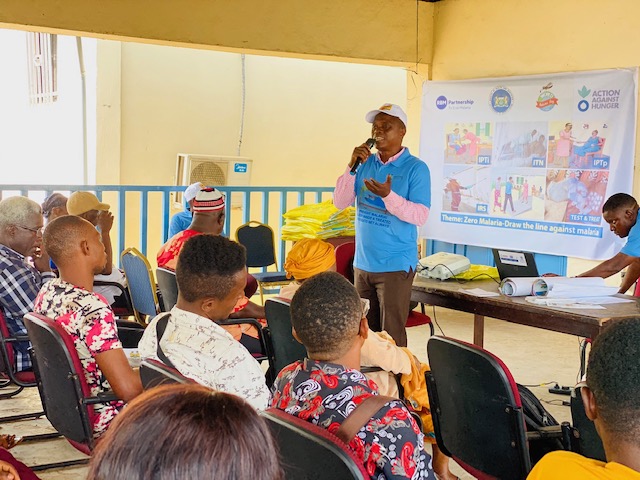 During the commemoration of World Malaria Day on 25 April during which period there were recognitions of global efforts made so far to control malaria, one of the vibrant Non-Governmental Organizations  currently operating in the country, Advocacy Movement Network (AMNet)  on Monday 25th April, 2022 joined other organizations in the country to commemorate this year’s World Malaria Day on the theme: “Zero Malaria-Draw The Line Against Malaria”.

The commemoration which was held at the District Health Management Team (DHMT) Office and the Waterloo Government Hospital respectively created the platforms for awareness raising on malaria within these communities by bringing out causative factors, prevention and how to treat it once it is contracted.

Speaking during the event, Brima Conteh, the Program Manager for the NFM 3Project AMNet, stated that World Malaria Day is set aside to highlight the need for continued investments and sustained political commitment for malaria prevention and control in the country.

He informed all that the issue of the existence of malaria has been a great concern not only in Sierra Leone but the world as a whole, adding that even though there are still challenges but said the theme for this year’s commemoration which is “Zero Malaria-Draw The Line Against Malaria” is one that sends a signal that with hands on deck and through collaborative actions Sierra Leone can achieve a Zero malaria status especially if we draw the line against malaria in the country.

Brima Conteh disclosed how they thought it fit to embark on such an event with the sole purpose of engaging community stakeholders on their role in encouraging community residents to make use of health facilities in their different communities, furthering that most times they choose to seat at home or visit quack doctors.

“We can only defeat Malaria as community residents when we change our mindsets towards how we deal with Malaria in our various communities,” he informed adding how some people will express the fear that if they visit health Centres they could be told they have sicknesses other than malaria.

He told that the health facilities are there for you them and should visit them whenever they experience symptoms of malaria in order to get prompt treatment.

He concluded by appealing to the Government through the Ministry of Health and Sanitation to increase budgetary allocation to the health sector and also called for effective monitoring of health facilities to make sure that they are effectively working and up to appreciable standards.

Focal Person for the Western Area Urban District Health Management Team (DHMT), Augusta Foday, said that most countries in the world have combated Malaria but said it is still rampant in Africa, stating that if other countries have combated its prevalence then Sierra Leone could not be an exception maintaining that through collective efforts such could be achieved.

She revealed that according their data, 38% of death occurrences are due to Malaria and that 17% of people admitted in various hospitals is as a result of malaria.

“We are all at risk to contract malaria but the more vulnerable are pregnant women and children below the age of 5 years. But the good thing about Malaria is that it can be prevented and treated by adhering to preventive  measures which include sleeping under treated malaria bed net, proper sanitation etc,” she pointed out.

Giving the keynote address, the District Medical Officer of Western Area Urban District Health Management Team (DHMT), Dr. Foday Sesay said that the issue of malaria is very important as the current status prove that the rate of people admitted in those health facilities is as a result of having malaria.

He encouraged all to treat malaria seriously maintaining that it should be eradicated in the country.

He said Government has been working hard to ensure that mosquito bed nets are distributed to health facilities and citizens but said in most cases citizens don’t use them for the intended purpose.

Dr. Foday Sesay also used the opportunity to admonish all to be engaging in community and environmental sanitation in their various communities which he said will also support the eradication of Malaria in the country.