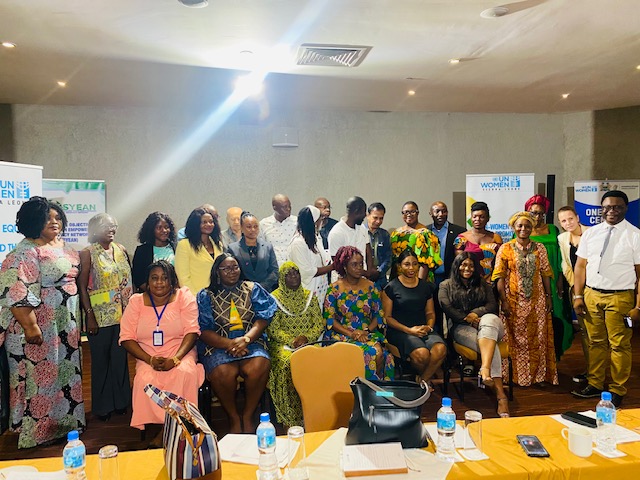 Ahead of their 2023-2027 strategic direction with support from Irish Aid, UN Women has on Thursday 28th April, 2022 held a consultative session with local entrepreneurs at the Radisson Blu Hotel at Aberdeen in Freetown.

In her keynote address, the Director of Research and Delivery at the Ministry of Finance, Dr. Yakama Manty Jones urged local entrepreneurs to be talking of convergence rather than competition.

She noted that there had been major conferences with regards addressing women issues, yet, progress seems slow in addressing those issues. “It is about time we change the conversation if we must effectively address women’s issues,” she admonished.

Yakama Jones continued that many efforts had been made in terms of addressing women issues but questioned the effectiveness of such efforts in achieving the collective goal of women.

She urged that the strategy which UN Women will develop to accelerate progress on women issues should be comprehensive adding that there are many questions to be answered and taken into consideration when developing a strategic plan.

Jones urged that local entrepreneurs do business not only for profits but  to also positively impact humanity further stressing on the need for gender-based budgeting and collectivity among women in the country who are also entrepreneurs which she said will thereby make their contributions more efficient. “Women have what it takes, they just need to change their approaches and mindsets,” she also advised.

She referred to the women as their partners underscoring the need for the businesses of these women to be strengthened in a bid to ensure economic growth and building gender equality in the country.

Chief Executive Officer of Invest Salone, Chukwu-Emeka Chikezie, disclosed that women are heavily represented in the informal sector, noting that if women’s issues are to be addressed then rapt attention must be paid to the informal sector.

Chikezie revealed that a critical challenge in addressing women issues is the lack of data, noting that there is deficiency in identifying where the women are and what they are doing.

In her own contribution, President of the Renewable Energy Association of Sierra Leone, Leah Suma, stressed the need for energy financing for women living in rural areas.

Mary Nguanya Foday from the African Development Bank noted that skills development is very crucial for private sector development and women’s empowerment. “There are lots of opportunities in the private sector, but what is needed is the skill,” she maintained. She further called on women to be ready to start before seeking support.

President of the Market Women Association, Haja-Marie Bob Kandeh, said she looks forward to a sustained partnership between UN Women and Market Women.

She revealed that cross border traders are challenged with ware houses and urged women to venture into agriculture despite the fact that there is also a huge challenge (deforestation) in that area.