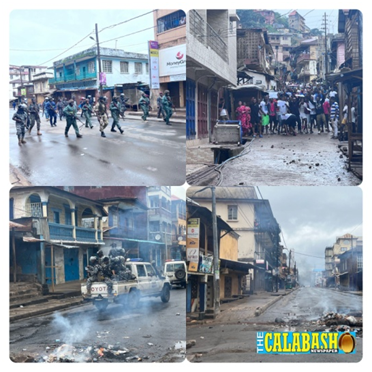 It became really tense as the time was approaching mid-day and
the Honourable Vice President and Deputy Chairman of the National Security Council directed the Republic of Sierra Leone Armed Forces (RSLAF) to assist the Sierra Leone Police (SLP) under the backing of Military Aid to Civil Power (MACP) Policy in the Emergency Category.

As the security personnel, including Police Officers and Soldiers,  were patrolling the streets in vehicles they were pelted with stones and other ‘missiles’ by the protesters, mainly made up of disgruntled youths and traders.

As the situation further degenerated into lawlessness a nationwide curfew was declared across Sierra Leone commencing 3:00 pm to last up to 7:00 am on Thursday morning, 11th August, 2022.

So far some have attributed the insurrection to the instructions of one Adebayor, a Sierra Leonean said to be residing in Holland, who has been releasing audios in which he has been caustically criticizing the SLPP Bio led Government for the economic hardship that many are said to be going through at the current moment. It was stated that it was him who declared the 8th, 9th and 10th August, 2022 as days when Sierra Leoneans, especially business people to stage a nationwide protest as a way of registering their dissatisfaction with the way the present Government is governing the country.

Reacting to the ugly incident some Sierra Leoneans have expressed divergent views. According to a Lecturer and Political Commentator, Alhaji U. N’jai, he said that the President must speak to the people of Sierra Leone and take them along his vision and challenges.

“Get down to the masses from the East, West, North, and South of the country, listen to them with the goal of making positive changes for leadership is a process and not a position. Great leaders are born in moment of crisis,” he suggested continuing that he must be a leader of the nation and speak to the hearts and minds of every Sierra Leonean on peace, unity, national identity and cohesion, patriotism, and what it means to be a good citizen.

“Be deliberate and intentional in being a father of all Sierra Leoneans and let it be one that is seen and felt by every citizen from Kailahun to Koinadugu, Falaba, Pujehun, Kambia, Karene, Kono, Bo, Kenema, Tonkolili, Port Loko, Moyamba and Western Area.

He said the President had an opportunity very few Sierra Leoneans will ever have in 2018; that is Head of State for a second time.

“Please treat it with utmost respect and humility. Your legacy hinges on how you perform now. You alone can direct what story you want us to tell our kids, grand kids, great grand kids about you. Would that story be one of greatness or one who led us to further divisions? I pray that it is the former and not the latter. Your advisers may provide wide range of advice, I hope you know that it is your legacy and not them that is on the line,” he further recommended.

For now the situation has been put under control and normalcy restored but a curfew imposed from 7:00pm to 7:00am. See attached Press Release:

The Honourable Vice President and Deputy Chairman of the National Security Council have directed the Republic of Sierra Leone Armed Forces (RSLAF) to assist the Sierra Leone Police (SLP) under the backing of the Military Aid to Civil Power (MACP) Policy in the Emergency Category. This directive takes effect on the date of this correspondence.

The directive is consequent on the potentially volatile security situation in the country caused by repeated social media incitements of the gullible population to embark on a countrywide violent demonstration with the aim of subverting the peace and stability of the State. The SLP has assessed its resources and advised that it may not alone cope with the emerging security situation.

The object of the directive is to ensure that proportionate plans are made and necessary actions taken by the RSLAF in support of the SLP to ensure the security of the state and its wellbeing.