Between 13 to 14 June 2018 three senior staff members of the Bank of Sierra Leone were queried by the bank for making unauthorized payment to some well-known government contractors. 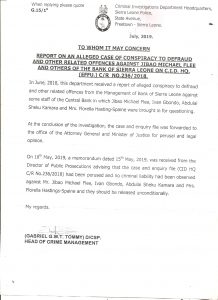 On 20th June 2018, after a hurriedly convened board meeting, the bank forwarded the outcome of the findings of their disciplinary committee to the CID Headquarters in Freetown for further investigation, and if possible, to proffer criminal charges against the accused persons.

However, in the middle of the investigations mounted by the CID, the bank hurriedly went ahead and summarily dismissed the three directors. The Bank erroneously quoted Article 9.1 of the Bank of Sierra Leone Staff Handbook as the basis for the dismissal of the three Directors.

It would seem that the Bank knowingly violated Article 9.6 of the Staff Handbook because the matter was never discussed by the management of the Bank as required.

The Bank’s key claim was that the Directors made unauthorized payment to contractors but this has been found by CID investigators to be false. The three directors after through investigations were described by the Director of Prosecution (DPP) ‘advising that the case and enquiry file (CID HQ C/R no. 236/2018 had been perused and no criminal liability had been observed against the three directors and that therefore they should be released immediately.

Our investigations further reveal that it is a well-known fact that, these so called unauthorized payments were legitimate claims drawn on cheques that were prepared, authenticated, signed and forwarded to the Bank of Sierra Leone for payment by the Ministry of Finance.

A senior retired Banker told this press that, cheques signed and forwarded to the bank for payment should be authorized by the drawer, as long as all material details of the cheque are in place.

It is sad that the Bank has consistently and deliberately ignored the legal advice given to them by the Director of Public Prosecutions in the Law Officers Department. The DPP advised that no further action should be taken against the accused persons. His legal advice is based on evidences sent to the CID by the Bank itself for investigation.

Unfortunately, it appears that the Bank has been led to believe that they can rely on their outdated Staff Handbook to argue their case in court.

A spokesman for the Ministry of Finance told this press that she was aware of the matter but would not comment on any advice that the ministry has given to the bank and prayed for common sense to prevail.

A senior official at the Bank of Sierra Leone told this press that the bank was aware of the DPP’s legal advice but was seeking further clarification.

Two of the Directors affected by the Bank’s decision have threatened to sue the bank for unlawful dismissal and are seeking for compensation running into billions of tax payer’s money.

A human rights activist who has been following this matter told this press that the decision by the bank to summarily dismiss the three Directors was a violation of their human rights. He described the Bank’s decision as outrageous and totally unacceptable.

It must be stated that this matter occurred before the new Bank Governor, Prof. Kelfala Murana Kallon who was appointed by President Julius Maada Bio.