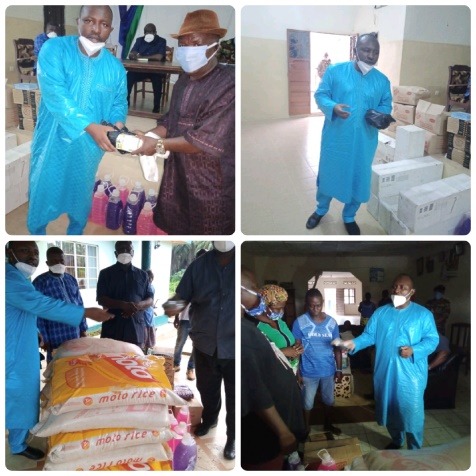 On the 6th,7th and 8th June 2020, Pavi Fort –Sierra Leone donated cash ,bags of rice and Personal Protective Equipments worth millions of Leones to the Kailahun, Kenema, Kono and Makeni Districts COVID-19 Emergency Response Centres (DICOVERCs) in order to scale up the fight against the spread of the coronavirus in the aforementioned districts.

The leading indigenous road construction company in the country, Pavi Fort Construction Company on the 8th June 2020, led by its dynamic and charismatic Chief Executive Officer, Alimou Barrie, landed in Bombali District, Northern Sierra Leone where they handed over a Twenty Million Leones (Le20,000,000) Cheque, 50 bags of rice,20 gallons of sanitizers and 3,500 face masks to the District COVID-19 Emergency Response Centre (DICOVERC) in Makeni meant for scaling up the fight against the spread of COVID-19 in that part of the country. An additional ten million Leones (Le10, 000,000) and 20 bags of rice were also handed over  to the local authorities in order to facilitate their movements, coordination and activities in containing the spread of the deadly virus that has brought some developed economies to their knees and claimed so many lives.

“Words could not express our happiness for this your wonderful gesture,”  were the words of the Paramount Chief of Bombali District, Bai Sheborah Kasanga 11, during the donation ceremony , a view that resonates the views of majority of the residents of Bombali. The Paramount Chief further expressed profound thanks and appreciation to the CEO of Pavi Fort, Alimou Barrie for what he described as a timely as well as patriotic gesture. He stated that the country truly needs people like Alimou Barrie, who out of innate patriotism and selflessness stepped in to give support to the Government as well as to uplift his fellow compatriots out of the tight situations and quagmire they currently find themselves.

The Coordinator of the Bombali DICORVERC, Alhaji Mohammed Saffa, maintained that indeed the support came in at the right moment and assured that they would be used for the intended purposes.

He highlighted how the donation is the biggest support they have so far received in recent times underscoring that it is soul touching that it came from an indigenous construction company and called on other well-meaning Sierra Leoneans to follow the footsteps of the company.

A representative of Civil Society Organizations and Non-Governmental Organisations operating within the district, Gibril Menasieba, also thanked the Pavi Fort CEO for the donation.

In his statement, Alimou Barrie, the Chief Executive Officer of Pavi Fort revealed that he decided to join the fight against COVID-19 in order to complement Government’s efforts in its strides to contain the spread of the virus in the country. He disclosed how he has made donations of similar nature in different parts of the country further mentioning that it is his intention to do so in all the 16 districts within the country.

The Pavi Fort team, headed by CEO Alimou Barrie, then proceeded to do another donation  in Kono District where they handed over a Forty Million Leones (Le40M) cheque, 150 bags of rice and Personal Protective Equipments (PPEs) to the Kono District COVID-19 Emergency Response Centre (DICOVERC) in Koidu Town on the 7th June 2020 geared towards the containment of the spread of the coronavirus in Kono.

Paul Gerber Saquee V, Paramount Chief of Tankoro Chiefdom, said the support from Pavi Fort is well in place and highly welcomed. He was speaking during the handing over ceremony of the aforementioned cheque and other items. He furthered that the donation is huge one especially as it came from a locally road construction company.

Speaking about the company’s support in the fight against COVID- 19 in the country, the CEO of Pavi Fort Sierra Leone, Alimou Barrie, said they are extending the gesture to all the districts in the country further informing how his company has already provided support to NACORVERC and other districts.

Deputy Managing Director of Pavi Fort S/Leone, Ing Sahr Saquee Gbondo, said the support offered by the company to the district is geared towards curtailing the chain of transmission of the virus in the district, more especially in communities that are close to border areas.

He clarified that the Le20M and 50 bags of rice are meant to facilitate the work of the Paramount Chiefs in their fight against the corona virus within their respective chiefdoms in the district.

Kono DICORVERC Coordinator, Saa Samuel Sam, expressed gratitude to Pavi Fort for the support maintaining that they are indeed somehow constrained with finance and food to fight against the spread of the virus.

“The support came at the right time when we really needed them as the district has been recording cases,” he intimated.

The Deputy Minister of Works and Public Assets, Hon. Philip Tondoneh and   the Member of Parliament for Constituency 027, Kono district, Hon. Rebecca Yei Kamara, appealed to other Sierra Leoneans to emulate the good example of Alimou Barrie at this crucial moment.

They praised him for the support saying the CEO has always been supportive in trying times. The occasion was attended by other Government officials and local authorities in the district.

Prior to those donations the company led by CEO, Alimou Barrie, on Saturday 6th June 2020 donated over 70 bags of rice, 10 million Leones, 4 thousand litres of sanitizers and 3 thousand facial masks meant for residents of Kailahun District.

On that same date, the company also donated 30 gallons of sanitizers, 4,000 facemasks and 100 bags of butter rice to the Kenema District COVID-19 Emergency Centre (DICOVERC) as well as 20 bags of rice to the local chiefs and a cheque of Le10, 000,000 to facilitate the movement of the DICOVERC officials.

The District Coordinator of the Kailahun DICOVERC, Morie Feika, heartily commended the CEO of Pavi Fort S/Leone, Alimu Barrie, for what he described as a timely, selfless and patriotic move to fight a deadly virus, restore sanity and continue to embark on development programmes. Feika highlighted that since an account was opened in the name of the Kailahun DICOVERC nothing was deposited there until Alimu Barrie gave them ten million Leones geared towards the fight against the COVID- 19.

He maintained that the support came at the right time especially with the challenges the district had been facing particularly by those manning the border areas with the objective of preventing illegal entries that could pose risks of the high spread of the virus.

In Kenema District, Pavi Fort also donated 30 gallons of sanitizers, 4,000 pieces of facemasks, 100 bags of butter rice to the Kenema District COVID-19 Emergency Response Centre COVID 19 Operation Center and 20 bags of rice to the local chiefs plus a cheque of Le10, 000,000 in the same vein of complementing Government’s efforts in the fight to contain the spread of the Corona Virus.

Chief Executive Officer of Pavi Fort, Alimu Barrie, maintained that since there had been an increase of COVID- 19 cases in the district, there is likelihood that the number of suspected cases would increase in quarantined homes, hence more food items would be needed to feed those who will be affected.

He emphasized on the relevance of adhering to precautionary measures set aside by the World Health Organization and the Ministry of Health and Sanitation which include regular hand washing, use of facemasks and practising social distancing.

Joseph Samba Kaifala, an influential personality in that part of the country, praised the donor, Alimu Barrie, regarding him as one of the diligent and dedicated  road construction contractors in the country whom ,he said, has immensely undertaken various and well completed  road construction and rehabilitation projects over the years under his company, Pavi Fort  and went further to laud his humanitarian gestures during trying times and in complementing Government’s efforts during these trying times, adding that plans are also underway to extend similar donations to other districts in the country.

He spoke on the significance to adhere to the COVID- 19 regulations admonishing all to be very vigilant, cooperative and not to be complacent in fighting the virus.

The Chiefdom Speaker of Nongowa Chiefdom, Kenema District, Chief Senessie Daniel Nilca on behalf of all the local authorities in the Chiefdom, expressed thanks and appreciation to Alimu Barrie for giving utmost priority to the nation’s interest and called on the District Coordinator of the Kenema DICOVERC to use the items for their intended purposes.

The Kenema District Council Chairman, Mohamed Amodu Sesay, dilated on the importance of helping others quoting a verse in the Bible which reads “Blessed is the hand that giveth”.

He said, on behalf of the 16 Paramount Chiefs of Kenema District and the People of Kenema, he warmly appreciated the gesture amidst these difficult times adding that the Pavi Fort CEO’s kindness will never be forgotten.

The Mayor of Kenema City, Thomas Baio, described the donor as a true patriot saying it came to him and many as no surprise as he knows the calibre of Alimu Barrie.

Mayor Baio stated that anyone who is willingly helping his/her country during these difficult times when the Corona Virus is ravaging different parts of the world, should be given a pat on the back and called on others to emulate the footstep of the CEO.

It could be recalled that on Friday 5th June 2020 Pavi Fort donated a huge consignment of hand sanitizers, five thousand clinical face masks, 50bags of rice and a cheque of ten million Leones (Le10, 000,000) to the District COVID-19 Emergency Response Centre (DICOVERC) in Bonthe District.

The donation of the aforementioned items and cash benefitted residents of Tihun, Sogbini and other chiefdoms. The Pavi Fort CEO also extended his kind gesture to the Paramount Chiefs of Bonthe district with the sum of five million Leones and ten bags of rice.

Prior to that, Pavi Fort Construction Company Sierra Leone on the 27th May, 2020 donated the sum of fifty million Leones (Le50, 000,000) and PPEs items including 5,000 face masks, 100 gallons of hand sanitizer (1 gallon) all worth Le. 120,000,000 to the Government of Sierra Leone through the National COVID-19 Emergency Response Centre (NACOVERC) in a bid to complement Government’s efforts geared towards combating COVID-19 in the country. The handing over ceremony took place at the National COVID-19 Emergency Response Centre (NACOVERC) situated at SLFA compound in Kingtom, Freetown.

Again, on Saturday the 30th May 2020 as a demonstration of its commitment to fight the spread of COVID-19 in Koinadugu and Falaba Districts, Pavi Fort Construction Company donated forty million Leones, five thousand Face masks, fifty gallons of hand sanitizers to the Koinadugu and Falaba District Emergency Operations Centers and ten million Leones to both the Paramount Chiefs of both districts at a ceremony held at the Koinadugu District Youth Council Hall in Kabala.

It is on record that Pavi Fort Construction Company has stood by the side of the Government of Sierra Leone during trying times as it did on August 14th 2017 when the mudslide occurred at Regent. The company was among those that donated relief items which included five hundred bags of rice, Le25 million Leones and provided three excavators to clear the rubble and also built fifty two (52) houses at 6 Mile to address the housing problems faced by the victims in the aftermath of the mudslide incident. 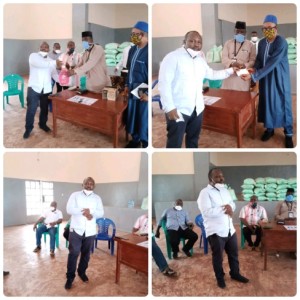 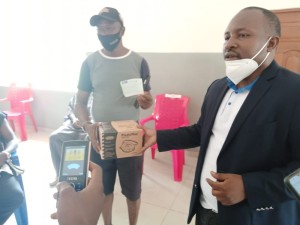 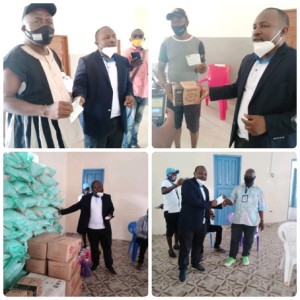 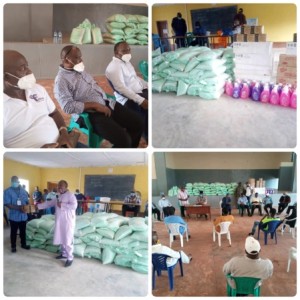 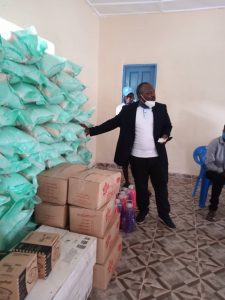