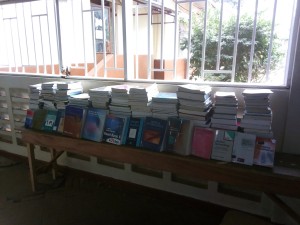 As a result of the commitment and resilience of the Principal of the Milton Margai College of Education and Technology polytechnic, Dr. Philip John Kanu, the United Kingdom and Europe Branch of the Milton Margai College of Education and Technology polytechnic on Wednesday 27th March 2019 donated 20 toilet seats, 20 toilet seat covers, 20 wash hand basins, 150 high flow showers, 40 basic taps, 20 connectors, 3 (6 feet) urinals with complete fittings, over 14 cartoons of various books including Health Science, 10 walkie talkies to facilitate communication, a lawn mower, 2,000 Pounds Sterling cash, white boards for teaching and other items, all valued at over 10,000 (ten thousand) Pounds Sterling to the college.
Some of the items were bought in the UK and shipped to Sierra Leone.
Donations were also made by Professor Abu Sesay, former Vice Chancellor, Njala University, the African Muslim Agency and other well-wishers.
Presenting the items and money to the Estate Officer of the college at the college’s Great Hall, Goderich Campus, Mr. B.W. Bockarie, Chairman of the Local Chapter of the Alumni Association, asserted that he is proud to be an old student, that the association has been recalibrated, commended the Acting Principal for being the driving force, pledged their commitment to his efforts to improve the learning environment on campus and appealed to students to take good care of the items for posterity as well as emulate the sterling example after graduation.
Mr. B.W. Bockarie further disclosed plans by the Association to award scholarships to students as well as have a budget, adding that they are working with other branches worldwide, such as the United Kingdom and Ireland Branch that presented the bulk of the items.
He also read the statement of the Chairman of the UK and Ireland Branch, Mr. Victor Abu.
The Principal of the college, Dr. Philip John Kanu, thanked God Almighty for what he is doing for the college, that nobody would develop the college except old students, articulating that they want to make the college great again and entreated the students to emulate the sterling example of the Alumni Association.
Dr. Philip John Kanu also acclaimed all those who donated, all in an effort to make students comfortable and revealed that very soon the newly-renovated toilets in the hostels would be commissioned, urging students to study hard and excel and not cheat to earn undeserved grades so that they would represent the college well globally, affirming that they have no more excuses not to excel and concluded that his ultimate goal is to transform the college to a university.
Earlier, the Acting Vice Principal, Dr. M. A. Jalloh welcomed all to the impressive ceremony revealing that alumni in Latin means one’s learning institution, second mother or something close to one’s heart, that the old students are proud of their alma mater, that two days ago two old students from The Gambia visited the college and were taken to their former hostels at Sylvester Renner and Elizabeth Hirst as well as the Home Economics Department, disclosing that one of the students is the Chairman of the West African Examinations Council.
He furthered that in some countries, the budget of Alumni Associations is higher than the national budget and commended the Acting Principal for working relentlessly to advance the college as well as the learning environment.
The Interim President of the Students’ Union, Rosaline Kamara, in her vote of thanks, asserted that the donation would help promote quality education and that they appreciate the efforts of the Principal to develop the college.
The introduction of dignitaries, presentation of the items and 2,000 Pounds Sterling cash climaxed the well-attended ceremony.