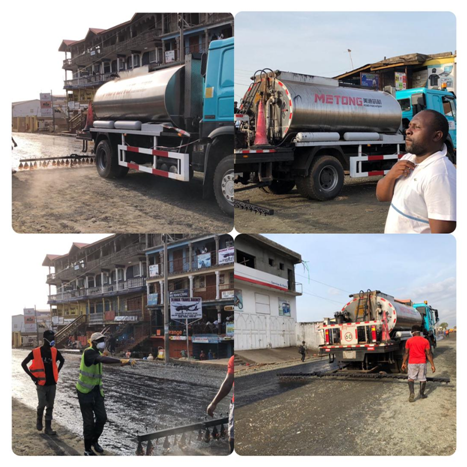 One accomplished feat, which this current SLPP Government, under the leadership of President Julius Maada Bio, through the Ministry of Transport and Aviation and its related Agencies, could be lauded for is embarking on improving some of the roads and bridges in the country to enhance mobility, standards and minimize accidents or crashes.

The fact that SLPP Government paid serious attention to complete certain uncompleted infrastructural projects it inherited, in addition to new ones that it launched, completed and some still ongoing is a testament to the fact that the Government is keen on fulfilling that aspect of the manifesto promise made by President Julius Maada Bio to translate mere intention into a tangible development reality that will be beneficial to many.

Through serious and continued engagements, after taking over the governance mantle in 2018, the SLPP Government successfully secured funding from the World Bank for the implementation of the Integrated Resilient Urban Mobility Project (IRUMP), a project that is now being implemented by the Ministry of Transport and Aviation, its relevant Agencies and other stakeholders

The main objectives of the project are improving the quality of public transportation, addressing climate resilience, improving road safety in selected areas and enhancing institutional capacity in the transport sector.

The Project will also allow the Ministry of Transport and Aviation and its respective Agencies to achieve comprehensive corridor improvements that will cover complete traffic management measures including intersection improvements, coordinated traffic lights, improvement of sidewalks for pedestrian movement, drainage, etc.

One of the selected areas in Freetown that was earmarked to be covered by the Project mainly geared towards improving road safety was the Ferry Junction axis in the East End of Freetown. The award of  Civil works, according to the Project specifications, was given to one of the highly commended indigenous road construction companies in the country, Pavi Fort-Sierra Leone, that won the contract,of which the Chief Executive Officer is Alimu Barrie.

Commencing construction work on the 15th May, 2022, Pavi Fort –Sierra Leone has successfully undertaken re-graveling works, covering a 400-metre stretch from J Matter, around the Dockyard axis to reach as far as the Bomeh axis, in the East End of Freetown.

Currently, the company is placing asphalt on the surface of the road, said to have been constructed forty years back, to bring it up to 10 cm from the previous 5cm and that involves three layers.

The company has also expanded the road from two lanes, on both sides, to three lanes, fixed a new drainage system to replace the old small clogged ones which will curtail or drastically reduce flooding on the road during the rains, and made provision for a traffic light to be fixed at the Ferry Junction intersection to control the traffic flow which will eliminate the presence of Traffic Police Officers and SLRSA Wardens,  made provision for street lights, guard rails to be fixed as well as convenient bus stops or parking spaces.

Though inevitably the construction work is posing certain inconveniences to the road users, however, for now or at this material moment the speed at which the company is undertaking or moving forward with the work, according to research conducted by this medium,  continues to impress many pedestrians as well as motorists, as captured from their comments all cumulating into commendations for the Government for coming up with the initiative to be funded by the World Bank.

To gauge the reaction of members of the public as to what they think of what is going on, this medium dispatched two of its ace reporters to interview the road users. From the feedback so far received some have expressed the view that it is quite mystery that in just, two weeks since commencement ,Pavi Fort could have accomplished so much, made a significant advancement in their work which is geared towards  improving the condition of the road in order to bring it up to modern standard. They claimed that the company is indeed doing very impressive work.

Many, so far interviewed heaped praises on the current SLPP Government saying it is indeed a good move and initiative on its part  to improve the condition of the road instead of leaving it to depreciate to ways that could pose lives and goods to danger.

Some stated that if what is going on at Ferry Junction is replicated by this Government in some other parts of the city then the issues of road accidents could be reduced, traffic congestion minimized and the life span of the roads extended and above all give the city a very good outlook or facelift.

“I am aware of the constraints we are facing at the moment to get through that part of the road but from what I have seen or understood so far the construction work is indeed a move in the right direction by this Government to improve the road network in the country and by extension enhancing infrastructural development,” a man who only identifies himself as a Lecturer at the Freetown Teachers College (FTC) stated with authority.

Some young people residing within the vicinity also commended the Government for the initiative of choosing that part of the city for the project implementation, maintaining that it created a situation for them to be employed as casual workers by Pavi Fort-SL.

“We have been promised by the CEO of Pavi Fort that based on our performances we do stand a chance of being recruited as permanent workers,” they expressed optimism.

In an engagement with a female Civil Society activist, she intimated that the Government is on the right trajectory adding that contrary to the expectations of some to see development materialize overnight, it takes time for certain feats to be accomplished. She added that indeed President Julius Maada Bio is passionate about seeing development and the implementation of the Integrated Resilient Urban Mobility Project is a pointer to that fact furthering to mention others like the Lungi Airport Project, the Mabang Bridge among a host of others. She concluded that in that direction the Government is on the right track.

What this medium also learnt during its fact finding mission was that hopeful, all being well,  the entire project will be completed in June 2022 with much improvements of benefits for all and sundry.