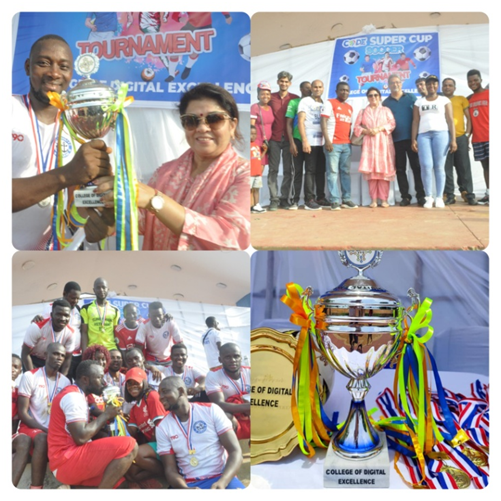 One of the best Information Technology institutions in the country, the College of Digital Excellence (CODE) has organized a one-day Super Cup Soccer Tournament for its students and the winning team took home the Cup, medals, and Le 4,500,000 cash prize. This auspicious event took place on Sunday 29th May 2022 at the Saint Edwards Secondary School, Kingtom, Freetown.

Five teams competed in the tournament: Team A, Team B, Team C, Team D and Team E respectively. Team E emerged as the winner of the tournament.

Speaking at the event, the Founder and Director of the College, Mrs Niharika Agnani, who started the kick off of the tournament, intimated that CODE is an institute that has the focus on empowering youths with all the technical skills and expertise required to compete in the modern world, which according to her is their main objective.

“We certainly want the youths in Sierra Leone to have the proper guidance and excel in areas of Information and Technology, so that they can also be empowered with the rest of the world,” the Director asserted.

She disclosed that the football tournament is their first extra curricula activity in the College. “It is just to building the spirit of sportsmanship and to bring all the students together. And let them know that education is not just studying but also doing other things out of the campus,” she furthered.

The College started with the first state-of-the-art IT Centre of Excellence in Freetown on 36 Main Motor Road, 2nd Floor, above Westpoint, Congo Cross. The CODE first  alliance is with the leading Skills and Global Talent Development Corporation called NIIT (www.niit.com) to impart the best cutting-edge IT education to the students looking for career-oriented education programs as well as professionals needing skill upgrade for career enhancement of Sierra Leone.

The Head of the Institution disclosed to this medium that the College is an idea envisioned by the Board of Directors of Choithram’s Group. Continuing that they thought it fit that education is one of the fields they can use to add more impact in society.

He averred that, it is well known that teaching goes along with extra curricula activities. He continued that it is not every time you engage students in the classroom, but also to involve them into 360 degree development.

He maintained that the aforementioned Tournament was a friendly game, stating that the main aim of organizing such is for them to be able to select the best players among the teams to represent the College on a different platform.

He mentioned that the tournament was quite impressive. He further revealed that they were surprised by the administration for giving the cash prizes to each member of his team.

Another student who participated in the tournament expressed his gratitude to the administration for organizing such an event for them, which according to him does not only unite them, but they also availed them the opportunity to have lots of fun.