Following President Bio’s endorsement of the candidacy of Hon. Sidi M. Tunis in a video played to the Extraordinary Session of ECOWAS in Liberia late last year for the position of Speaker of ECOWAS Parliament, Hon. Sidie M. Tunis has been duly elected on the 9th March 2020 at the Mahatma Gandhi International Conference Center in Niamey, capital of Niger.

Hon. Tunis has been successfully elected as the sole candidate from Sierra Leone and was inaugurated as the Speaker of the 5th Legislature of the ECOWAS Parliament for a period of four years; following the end of tenure of Senegal’s Moustapha Cisse’ Lo. In light of precedent, Togo is next in line after Sierra Leone.

The Speakership of ECOWAS is non-residential and Hon. Tunis also retains his position as Leader of Government Business in the Fifth Parliament of the Second Republic of Sierra Leone assembled; and now the substantive Speaker of the 5th Legislature of the ECOWAS Parliament.

Hon. Tunis was nominated by Hon. Veronica Sesay and seconded by Hon. Shiaka Sama, an Independent Member of Parliament.
In his acceptance speech, Hon. Tunis recognized a 30-Man delegation from Sierra Leone headed by the Speaker of Parliament, Hon. Dr. Abass Chernor Bundu.
He said that he was proud and grateful to take the mantle of ECOWAS Speakership following the endorsement and confidence reposed in him by President Bio; whilst thanking his supportive wife, the Presidents of Niger and the ECOWAS Commission.
Speaking on his role relative to directing the business of ECOWAS Parliament and its organs, he deeply appreciated past Speakers for their dedicated services to advance the cause of the ECOWAS Community in light of free movement of goods and persons in the Region.

He called for continued monitoring of the situation in Togo, youth empowerment and the need for meeting the convergent criteria for the realization and operationalization of the ECOWAS single currency to facilitate and enhance effective trade in the Region.

He also called for ECOWAS to be accountable through the establishment of a Public Accounts Committee; to guarantee prudent fiscal management of the Community’s funds. He also implored ECOWAS to go closer to the people by utilizing innovative and effective means of communication to reach the very people the Parliament is constituted to represent.

Committing to mediation efforts in conflict prone areas, he talked about counter-terrorism strategies to ameliorate the situations in Mali, Burkina Faso and some parts of Nigeria. On removing the barriers to enhance the free movement of goods and persons, he spoke about respecting the outcomes of elections, peaceful transfer of power, human rights, migration and trafficking.

He particularly called for improved information sharing as a counter-terrorism measure; adding they could not sit idly by and allow bad people to inflict harm on the people; whilst speaking on women’s empowerment and effective preparedness to tackle the effects of the coronavirus pandemic.

In his Speech of solidarity by outgoing Speaker, Moustapha Cisse’ Lo, he recognized the President of Niger as a Pan-African who is working assiduously for the advancement of Africa, ECOWAS and the people of Niger. He referred to the ECOWAS Parliament as a representative body charged with the responsibility of maintaining peace, democracy and stability in the Region. He observed that his tenure was not a luxurious one, but one that was purposely full of results; citing other interventions including the ECOWAS mediation Team sent to Sierra Leone after the conduct of the last general elections in 2018; aimed at preventing a re-occurrence of conflict in Sierra Leone; illegal migration; and counter-terrorism efforts in the Sahel Region. Concluding, he called on the new MPs to work closely with the ECOWAS Commission; whilst saying that the Office of the ECOWAS Speakership is fraught with challenges such as no-residency and inadequate funding to execute the duties associated to that Office.

President of ECOWAS Commission, Jean-Claude Kassi Brou described Niamey as the bedrock of regional integration in light of installing the 5th Legislature of the ECOWAS Parliament; whilst citing the ECOWAS Supplementary Act authorizing the Chairman of the Authority of Heads of State and Government to inaugurate a new Parliament. He recognized the role played by the 4th ECOWAS Parliament in tackling threats by terrorists in the Sahel Region. He also said that inclusive social development is the foundation of democracy; whilst calling on the 5th ECOWAS Parliament, headed by Hon. Tunis to take the necessary initiatives to amplify the cause of ECOWAS by following good precedents.

Before declaring the 5th ECOWAS Parliament open in Niamey, President Mahamadou of Niger observed that since its construction, this is the very first time an event is being hosted in the Mahatma Gandhi International Conference Center in Niamey; with a capacity of a little over 2000. He also spoke of security, democracy, single currency and infrastructure saying they are representative of a solid foundation for the development of the ECOWAS Community. He also talked about respecting constitutional term limits, the outcomes of elections, strengthening of solidarity and effective tackling of terrorism and conflicts within the ECOWAS Community; whilst noting the coronavirus virus as a threat that should be contained as was done with the deadly Ebola virus in Guinea, Liberia and Sierra Leone few years ago.

He also called on West African Leaders not to seek third terms in spite of constitutional loopholes. He averred that the period of hanging onto power for long is coming to a close by allowing change of power by democratic means. Calling for consensus and a peaceful transfer of power in Guinea; he re-affirmed support for the outcomes of the election in Guinea-Bissau. Speaking on the single currency, he spoke about the reduction of wage bills as one of the convergent criteria for its adoption and launch in Niger; adding the single currency would promote regional integration and foster growth and advancement on the ECOWAS economy.

He referred to the MPs as the souls of democratic representation responsible for creating a coherent integration in the Region by building on the gains of democracy; through the free movement of goods and persons, and upholding human and people’s rights.

Other Members of the ECOWAS Parliament have already subscribed to same. 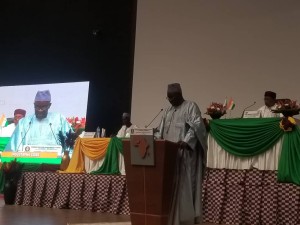