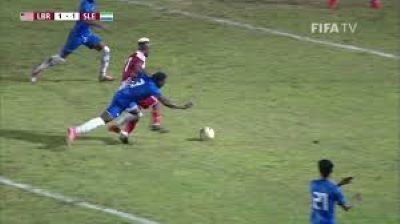 Sierra Leone’s darling Leone Stars fell to an unfortunate late defeat to the Lone Stars of Liberia last Wednesday, but the Leone Stars would be looking to get their revenge as the two sides meet for the second leg this Sunday in Freetown.

The Leone Stars lost the first leg of the 2022 FIFA World Cup Qualifiers preliminaries to the Lone Star of Liberia by three goals to one (3 – 1), after a 95-minute encounter at the Samuel K. Doe Sport Complex in Paynesville, outside Monrovia, Liberia on Wednesday, September 4.

It was a star-studded affair as both sides fielded big names from across the globe. The Leone Stars conceded the first and second goals through penalty kicks. The first goal was described as very controversial and coming into the first half of play; and the second scored in the second half of play.

The second and third goals scored by the Liberian side came in the last ten minutes of play after the visiting team had reduced the deficit in the second half during the 56th minute of play with Kwame Quee, who plays professional football in Iceland, scoring the only goal for the Leone Stars.

However, the third goal for the Liberian side came from Sam Johnson, who plays professional football in the USA, in the 89th minute after what appeared to be a defensive blunder and lack of proper coordination between the central defender and the goalkeeper of Leone Stars.

Commenting on the outcome of the match, many Sierra Leoneans, who watched what came to be known as the Mano River Union Derby through SLBC TV and other local channels, blamed the country’s defeat on poor refereeing and terrible defending on the part of Leone Stars.

The Leone Stars’ technical side is called upon to fix the problem before the return leg at the Siaka Stevens National Stadium in Freetown on Sunday, September 8, 2019.

Others commentators said it was the better side that won, whilst also expressing patriotic optimism that Leone Stars could win on their home tuft to return the compliment, as they play host to the Liberian side whose first-leg victory was watched by their President – George O. M. Weah, one time Player of the Year Award-Winning Footballer.