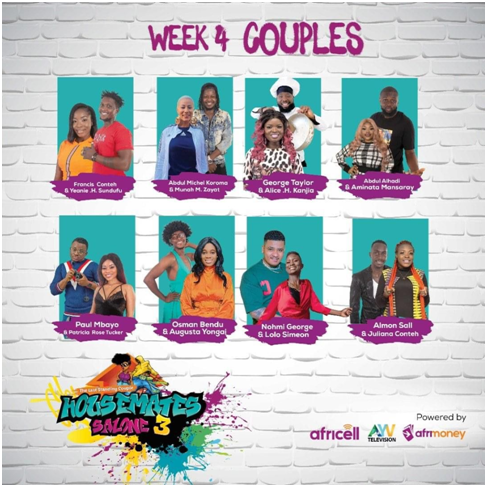 The next eviction for Housemates Salone Season 3 is slated to take place on Sunday, 19th June 2022 which will mark the end of an amazing journey for some of the competitors in the Reality TV Show.

It must be noted that after the last eviction the Housemates were uncoupled by the Chief of the House for a new coupling. The new couples are now performing various tasks as directed by Sir Chief or Madam Chief in order to gain winning points that could probably count in saving them from eviction.

As the Yagba continues for the Le 250 M cash prize & a round trip to Dubai, members of the public are now earnestly voting for their favourite Housemates. Members of the public residing in Sierra Leone should continue to vote via Afrimoney. To do so, they should just dial *161*10*1# with the NUMBERS of the Housemates.   For International voting it must be done via  www.housematessl.com or www.Africell.sl .

When the eviction takes place on the 19th of June 2022,  the Housemates will be uncoupled again by the Chief of the House for a new coupling. They will then be given the opportunity to choose someone with whom they will be comfortable within the following week and perform assigned tasks to win points.

It must be reiterated that the fate of any of the Housemates is determined largely by the public through the aforementioned voting channels. Members of the public could vote as many times as possible for their favourite Housemates.

As it has been realized the boarding of twenty-two Housemates under one roof, for a specific length of time, giving them the opportunity to interact on a daily basis is exposing the innate potentials they possess that could be harnessed and tapped for productive ends.

They are expected to perfect assignments delegated to them by Sir Chief or Madam Chief who are controlling their moves and actions as well as grade them as and when the show is progressing.

They are learning new skills from their co-competitors in the House, displaying coping mechanisms under various conditions and probably learning how to comport themselves when they find themselves in any public arena or gathering.

The Housemates are taught or learning by themselves how to prop up their self-esteem, be courteous, and courageous and control their ego under stressful conditions. They are being taught how to express themselves publicly, respond to questions, how to play certain roles in real-life situations.

In addition, some corporate institutions are using the platform not only to advertise but to also teach or school the Housemates and by extension the watching public what types of services they have to offer, how to go about performing certain tasks and anything else that has to do with empowering their minds geared towards cultivating positive mindsets. For example, the Rokel Commercial Bank taught them how to open an account.

The Reality TV Show is also exposing the Housemates to the outside world as it is viewed far and wide. Talents may be spotted and interested individuals may want to harness those talents to be used for the advancement of various human endeavours.

For now relax in your comfort zones, enjoy watching Reality TV Show per excellence and continue voting to save your favourite Housemates from eviction.