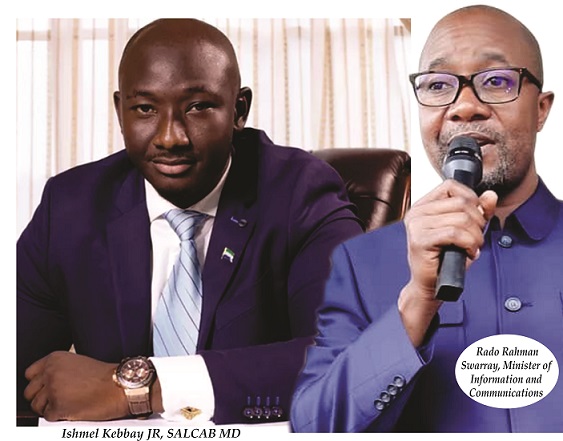 After running Sierra Leone Cable (SALCAB), an agency that controls the country’s internet gateway, for over a year without realising much returns and the institution was in huge debt, the agency closed down in 2017 with a negative cash flow of Le327M.

SALCAB’s situation became worsened in 2018 with a liability of Le9.7Bn as a result of repayment of loans from banks, vendor payment for spare parts and related items which has resulted into a huge exposure of the institution to debt and the possibility of going into administration if Government does not inject huge capital to salvage the situation.

Looking at the country’s dire economic situation, the Director-General, Ishmael Kebbay in his wisdom and in consultation with the general Board members and Management thought it fit that the only way to keep SALCAB as a  viable and relevant institution to the country is to privatise it  to a third party.

The third party will be charged with the responsibility of network operations and maintenance of the submarine fibre optic network and the landing station including supply chain planning, equipment, spares and capital expenditure as well as related network expansion, upgrade and contingency plan and service delivery.

It will also bear responsibilities of  research of new product development, market launch including the creation of ethical business climate in the country that attract more investment.

The said proposals were approved by Board and Management with the request for selective bidding and an Expression Of Interest (EOI) was sent to the National Public Procurement Authority (NPPA) on 27th January, 2020 for vetting.

The EOI can be seen on NPPA website:https://www.publicprocurement.gov.sl/index.php/public-notices-2/bid-oppurtunities/sierra-leone-cable-limited-salcab.

NPPA did not grant DG’s request to undertake selective or restrictive method of procurement, but allowed the DG to embark on an open tender.

After EOI Expression had been advertised and an open tender begun by SALCAB, the Minister of Information and Communications, Mohamed Rado Swarray came in to protect the country’s interest.

Mr Swarray ordered that all processes in respect of the privatisation of SALCAB be put on hold to ensure that the correct process was done.

The Minister of Information was highly concerned about entrusting the whole operations of SALCAB to a private entity saying it has the potential to compromise national security.

Growing misconceptions now overshadow SALCAB while on the threshold of privatisation and unbundling accusing the Minister of selling the institution.

At a press conference held at the Ministry of Information and Communications, Mr Swarray made it clear that SALCAB was not for sale.

The Minister however confirmed that SALCAB would be unbundled to ensure operational effectiveness and efficiency.

Suffice it to say the project of unbundling SALCAB never came from the Information Minister.

Owing to widespread misunderstanding and misconceptions about SALCAB’s unbundling, Minister Swarray, last week, appeared before the Parliamentary Committee on Transparency and Accountability where he explained the unbundling process.

The Minister told parliamentarians that the unbundling of SALCAB was in the country’s interest.

When the privatisation idea came up, Minister Swarray however, insisted on upholding the State’s interest by ensuring that Government handles SALCAB’s security aspect while the third party manages the commercial aspect.

The letter dated 19th August, 2019 sought an approval from NPPA so that it could commence the bid process for the transformation of SALCAB into a private entity.

“We are proposing a business model that will allow SALCAB outsource the operations of the sub-marine fiber-optic network to a third party via lease operation model,” the letter reads in part.

It further states that the entity to whom SALCAB will be leased bears the cost of operation, maintenance, administrative, and commercial cost of the landing station while giving SALCAB a fixed revenue for the month.

Sierra Leone, the letter says, will not have any operational cost exposure to the network including related capital expenditure, equipment, spares, service recovery among others.

Should the arrangement go as planned, the third party will absorb the existing SALCAB staff to drive network, sales and marketing.

As SALCAB stands on the Threshold of Unbundling, various sectors of society are less satisfied with the project.

Almost invariably, under the new arrangement, SALCAB will recalibrate its business model towards its open access terrestrial fibre optic network with a mix of a passive network for backhaul transmission and distribution.

It will mainly focus on real fiber network operations at the other end of the spectrum.

“The Public-Private Partnership model employed for operating SALCAB was a slippery-slope for Government of Sierra Leone. The operators were not meeting their High Operating Expense (OPEX) obligation to operate the facility. They were only sorting after the direct benefit of extracting bandwidth while the facility almost perished,” the letter alleged.

The 14th January application requested NPPA for a ‘No Objection’ to undertake selective or restrictive consultancy services procedures for outsourcing the operations of SALCAB.

In its reply, NPPA did not grant the MD’s request for selective or restrictive method of procurement as the exigency of the service does not meet the requirement stated in Section 41(1) of the Public Procurement Act.

Apart from its failure to meet its OPEX obligation, the correspondence also indicates that the company has not been profitable adding that it is at a breakeven point to sustain its operational expenses.

The cash flow, it says, is very weak to undertake any significant capital expenditure.

Weak revenue collection, high debt exposure of over $6.7M, running of SALCAB as a not-for-profit entity by the previous administration and difficulty of talent acquisition in the public sector were part of the case for privatisation and unbundling of SALCAB.

SALCAB was operated under a Public Private Partnership model from 2011 to 2013 which did not benefit the institution.

Between 2013 and 2014, Government of Sierra Leone through the Ministry of Information and Communications revoked the equity of private individuals and refunded the capital contributed per share of the private partners.

Government took full control of the facility whose landing station it has been operating from 2014 to date.

Despite Government taking the lead to set the stage for the stimulation of the country’s digital economy, it needs to protect her investment by employing the right business model that will pay-off associated liabilities and earn returns on investment.

Incidentally, the current business model does not optimize enough to support Government pay its liabilities.

Document seen by this medium shows that SALCAB is expanding too thin and horizontal through the in-sourcing, operations,  maintenance and commercialisation of the submarine optical and terrestrial networks.

It also shows that SALCAB has not been profitable since its formation and operation under the PPP model up to a point Government took full control of the station facility.