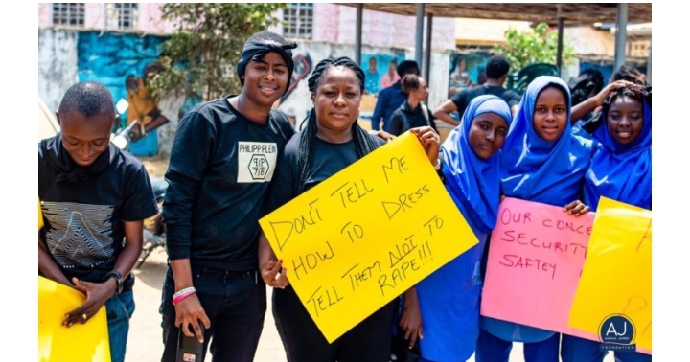 The ‘’Black Tuesday’’ is an initiative launched by the Asmaa James Foundation in Sierra Leone to raise awareness on issues of violence against women and girls with a focus on rape and sexual penetration. The Asmaa James Foundation is a women and girls health advocacy organization founded by Sierra Leonean journalist Asmaa James Kamara, Station Manager of Radio Democracy 98.1.
The Black Tuesday was first launched in Freetown in December 2018 that brought woman and girls from different walks of life to discuss on Rape and Sexual Penetration and raise awareness on it effects to the development of our nation, Sierra Leone.

The Black Tuesday campaign is engaging women and girls across Sierra Leone, to educate them on the effect of rape and sexual penetration and create an enabling environment for them to speak up on issues that matters; breaking the silence on rape is a major goal of the Foundation.
Purposeful Production has been one of the key partners in supporting the Foundation to carryout its activities across the country in ensuring that the message of rape and sexual penetration is discussed and digested by the community people, stakeholders and the girls themselves.

In less than three months, the Black Tuesday Campaign has been implemented in three districts including Western Area Urban, the people of Mile 91, Bo and Magburuka Districts where the residents appreciated the efforts of the Foundation for bringing such initiative in their communities.
The Rainbow Center has been a strategic player in the Black Tuesday campaign in providing statistics and giving confidence to women and girls to report their cases to the center whenever they are raped or sexually assaulted.

Speaking to Asmaa James, she stated that women and girls face numerous challenges in their communities, gender based violence, teenage pregnancy, child marriage, rape and sexual exploitation have increased and we need to stand up for our women and girls who cannot speak up for themselves.
“As Station Manager of radio democracy and founder of Asmaa James Foundation. I’m using my platform to speak up on these issues, engage the girls in breaking the silence so that they too can have their voices heard locally and internationally. The Black Tuesday Initiative is just a start, we have lot in-store for our women and girls to become potential people in the development of our Country Sierra Leone,” she said.

The Black Tuesday Campaign next stop will be at Kambia District.
“We are going to engage the sixteen administrative districts of Sierra Leone to preach the message and raise public awareness against all forms of abuse against women and girls most especially on rape and sexual penetration. Thanks to the President H.E Julius Maada Bio for the state of emergency on rape and the First Lady Fatima Bio for the Hands Off Our Girls initiative as both are timely. We are going to engage the Government to amend our weak laws so that there will be no escape root for perpetrators,” she concluded
.